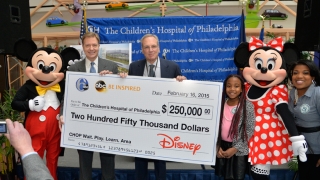 The Children’s Hospital of Philadelphia (CHOP) today announced a $250,000 gift from Disney, together with Disney • ABC Television Group and 6abc, at a check presentation event in the Colket Atrium to celebrate their generosity. The gift was presented by 6abc president and general manager, Bernie Prazenica, who was joined by two very special visitors, Mickey Mouse and Minnie Mouse. In recognition, The Children’s Hospital of Philadelphia will name a Wait. Play. Learn. area within the Buerger Center for Advanced Pediatric Care, the world-class outpatient facility to open this summer.

6abc president and general manager Bernie Prazenica said, “We support CHOP’s belief that every child deserves a story of hope. Here at 6abc, it’s our hope that this gift will help write many of those stories. We’re happy to build the interactive Wait. Play. Learn. area that will add a few smiles to those stories of hope. And who better to deliver those first smiles than Mickey Mouse and Minnie Mouse, who will join us to mark this next chapter as one to celebrate.”

“We are extremely grateful for Disney, Disney ABC Television Group and 6abc’s generosity, and for their support in helping to ease the hospital experience for children, which underscores CHOP’s commitment to family-centered care,” said Steven M. Altschuler, MD, chief executive officer of The Children’s Hospital of Philadelphia. “Disney shares our belief in the power of imagination and creativity, and its ability to provide a transformational sense of comfort and healing to families when they need it most. It is befitting to name a Wait. Play. Learn. area within the Buerger Center for Pediatric Advanced Care so that children seeing multiple medical specialists can enjoy fun and educational activities between appointments.”

The Buerger Center for Advanced Pediatric Care will revolutionize care for children, standing as the nation’s most state-of-the-art facility for outpatient medicine. The Buerger Center reflects the essence of family-centered care at CHOP, designed to alleviate stress on families who visit for procedures and appointments. Wait. Play. Learn. areas are an important feature on every level of the Buerger Center and will help bring positive, lasting change to the hospital in in countless ways.

Disney aims to enrich the lives of kids and families by providing happiness, hope and laughter to those who need it most. This tradition dates back to the 1930s when Walt himself would visit with children, often accompanied by Disney characters and animators. To build upon this time-honored tradition, the CHOP Wait. Play. Learn. area will engage children and young adults in exploratory and educational play, while demonstrating Disney’s long-standing commitment to children’s well-being and health.

About The Walt Disney Company

The Walt Disney Company, together with its subsidiaries and affiliates, is a leading diversified international entertainment and media enterprise with five business segments: media networks, parks and resorts, studio entertainment, consumer products and interactive media. Being a good corporate citizen is a time-honored Disney tradition. Through contributions, collaborations with local organizations, in-kind gifts and volunteering, Disney helps to brighten the lives of kids and families in need and strengthen communities around the world. In 2013, the Company donated nearly $370 million in cash, in-kind support and products, and Disney VoluntEARS gave over 667,000 hours of service. For more information, visit thewaltdisneycompany.com/citizenship or twitter.com/citizendisney.

The Disney • ABC Television Group is composed of The Walt Disney Company’s global entertainment and news television properties. This includes the ABC Television Network, ABC Owned Television Stations Group, ABC Entertainment Group, Disney Channels Worldwide, ABC Family as well as Disney •  ABC Domestic Television and Disney Media Distribution. 6ABC WPVI-TV is part of the Disney • ABC Television Group. 6abc Action News is the #1 local news brand in the tri-state, and the undisputed news leader for the past 35 years. 6abc.com, the official website of Action News, is also the #1 local TV news website in the market. WPVI-TV is the ABC-owned station serving the Delaware and Lehigh Valleys. With Disney • ABC Television Group programming reaching millions of viewers each week, the networks are ideal platforms to inspire viewers to drive positive change in their communities. Additionally, Disney • ABC employees across the globe continue to contribute their time and efforts to the local neighborhoods in which they work and live. For more information, visit 6ABC.com.