A 3-year-old male presents for the evaluation of pain and difficulty moving his right arm. He was seen in Urgent Care 3 days ago for an upper respiratory infection with fever and was prescribed an inhaler and a short course of steroids for wheezing, but there was no weakness noted. He continued to be febrile and fussy. During breakfast this morning, his mother noticed he was not picking up food with his right hand, but only using his left, and that he would sometimes use his left hand to move his right arm. His mother reports that he may have fallen onto an outstretched arm while playing the day before, but he didn’t seem to have hurt himself.

On physical examination, the child is mildly ill appearing and fussy. He has mild upper respiratory congestion, but normal breath sounds, and febrile to 101. His right arm hangs limp by his right side. He appears uncomfortable when it is manipulated, but there is no obvious injury. He is unable to give a high five, but is able to demonstrate a pinching movement with the fingers of that hand. Deep tendon reflexes are decreased in the affected arm, but sensation is normal.

The diagnoses to consider in this patient with decreased use of the right arm include injury, toxic synovitis, brachial neuritis, and a lesion of the anterior horn cells of the spinal cord. The diagnosis of acute flaccid myelitis (AFM) is suggested by the acute onset of flaccid paralysis with proximal distal weakness and decreased deep tendon reflexes in the setting of a febrile illness, particularly an upper respiratory infection. Pain in the involved limb(s) may be significant. 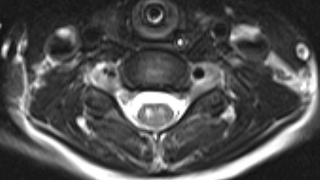 Figure 1: T2 abnormality of gray matter in the cervical spinal cord, most notable in the right anterior horn cells. On exam, grip strength is often normal, thus it is essential to have the child attempt to raise the arm over their head to identify the weakness. This should prompt imaging of the spinal cord, which, in this case, demonstrates a T2 hyperintense longitudinally extensive lesion involving central gray matter, with a predilection for the anterior horns (see Figure 1). Spinal tap demonstrates a CSF pleocytosis with a lymphocyte predominance and variably elevated protein. In cases where the diagnosis is unclear, electromyography may be helpful and may also provide information about prognosis.

A high index of suspicion is necessary to make the diagnosis of AFM, given that so many more benign conditions present with unilateral upper extremity weakness. AFM is associated with a risk of progression to respiratory decompensation and the need for ventilatory support, so these patients must be carefully monitored in the hospital. Management of AFM is primarily supportive, and in the absence of controlled trials the optimal medical management remains unclear. Intravenous immunoglobulin (IVIG) was helpful in a mouse model of EV D68-associated AFM when administered early. The utility of steroids and plasma exchange is debated, but they may be warranted in some cases, particularly if there is significant cord swelling.

The predilection for the anterior horn cells in AFM is reminiscent of poliomyelitis, and, with the typical CSF findings, suggests a viral etiology. AFM was first widely recognized in 2014 in the setting of an increase in severe upper respiratory infections associated with enterovirus D68 (EV D68). However, subsequent increases in AFM were less clearly associated with this virus, so a definitive viral connection remains to be established. What is clear is that the recognition of AFM is increasing, with spikes occurring on a biennial basis: 120 confirmed cases in 2014, 149 in 2016, and 223 in 2018.

In addition to the routine testing mentioned above, infectious disease testing, including respiratory PCR panel and enteroviral PCR from NP swab, serum, CSF, and stool should be sent immediately upon suspicion of AFM, as rapid testing is more likely to identify an associated infection. Suspected cases should be reported to Centers for Disease Control and Prevention (CDC), and appropriate samples should be submitted. The forms and additional information are available on the CDC website.

The prognosis for patients with AFM is uncertain, with many patients experiencing slow and often incomplete recovery. Early initiation of therapies, including inpatient rehabilitation, is essential. Improvement with continued physical and occupational therapy may continue, even years from diagnosis. Nerve transfer surgery may be an option for some patients with persistent weakness.

In summary, AFM is an emerging condition with significant associated morbidity. Close monitoring of affected patients is warranted. Multicenter efforts and continued surveillance will be required to elucidate the viral etiology and predisposing host factors for AFM. Prompt reporting of incident cases to the CDC will help to maximize knowledge about the condition.

MOG-antibody associated disease is an emerging demyelinating disorder with a disease course that is distinct from MS.

Daily Headache that Won’t Go Away

Using the case of a 14-year-old girl presenting with a new daily persistent headache (NDPH), we discuss the possible diagnoses and treatment options.

Ignoring Mom or a Bigger Problem?