Adolescence is a time of significant change in the body as children shift towards adulthood. Many of these biopsychosocial shifts result in changes in sleep habits, which can affect mood, academic performance, and family and social relationships. When asked about sleep, adolescents will often complain to their pediatrician about excessive daytime sleepiness, likely due to insufficient sleep. Many intrinsic and extrinsic factors play a role in their lives, including increasing family, academic, and social demands, in addition to biological changes. Together, sleep issues in adolescents tend to have significant impact on their functioning, as well as their families.

Teenagers need on average 9.25 hours of sleep a night (Figure 2). However, a vast majority of adolescents report that they do not get enough sleep, with a reported average of about 7 hours. This lack of sleep results in a “sleep deficit” of about 2 hours a night, which accumulates over the week leading to a significant shortfall by the weekend. In response, teenagers tend to oversleep on the weekends to “catch up,” but then have difficulty falling asleep on Sunday.

Figure 2: Recommended quantity of sleep in a 24-hour cycle 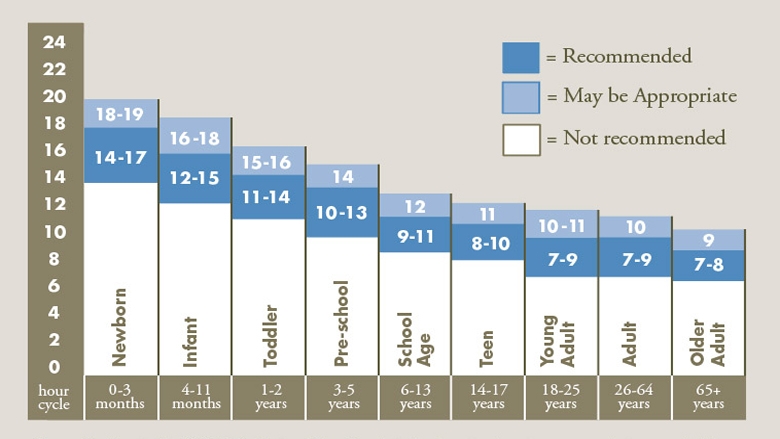 It is important to ask your patients and families about the quantity and quality of sleep. Sleep should be a lifestyle priority for the whole family. The assessment of sleep problems should include a clinical history that covers the routine, sleep schedule, and nocturnal and daytime behaviors. Any medical and psychiatric conditions that could contribute to sleep problems should be noted, as well as medications, developmental concerns, and hospitalizations.

Remind patients that maintaining a consistent, regular sleep schedule is important. They should not deviate more than 2 hours from their weekday to weekend schedule; avoid “sleeping in” on weekends; and aim to get on average between 9 to 9.25 hours of sleep per night. Using a sleep diary can be an effective tool to help capture the pattern of sleep behaviors. If warranted, the use of an actigraphy, polysomnography, and multiple sleep latency test could help rule out other contributing factors to sleep, such as OSA, PLMD, and narcolepsy.

Encourage proper sleep hygiene habits such as removing electronics from the bedtime routine at least 1 hour before bed. Other important components of good sleep habits include: regular bedtimes and wake times, avoidance of caffeine, and avoidance of engaging in exciting behavior before bed.

Common sleep issues include the following: