--In Newly Recognized Cause of a Pediatric Mitochondrial Disease, CHOP Researchers Find Long-awaited Answers for Parents 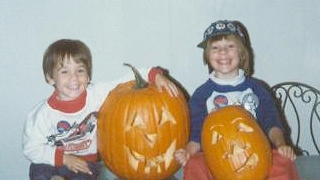 Chuckie Barnett at age 3 (left) and Michael Barnett at age 5 Over 30 years ago, Marsha and Allen Barnett lost their sons to a puzzling childhood disease that relentlessly attacked their nervous systems and sapped their energy. After 5-year-old Chuckie died suddenly in 1981, doctors provided a name for the disease: Leigh syndrome. Leigh syndrome is a complex disorder typically caused by dysfunctional mitochondria, the tiny batteries inside all cells that generate our energy. Two years later, the same disease killed Michael, Chuckie’s older brother, when he was 10 years old.

Earlier this year, Mrs. Barnett, who lives in southeastern Pennsylvania, received a phone call from a physician she knew, Marni J. Falk, MD, at Children’s Hospital of Philadelphia (CHOP), where Barnett has long supported research in mitochondrial medicine. “She asked about Chuckie’s and Michael’s symptoms, then told me, ‘I think we found the causal gene mutation,’” she said.

Falk, the Executive Director of CHOP’s Mitochondrial Medicine, a frontier program, led a research team that identified the inherited mutation in the Barnett family — a change in one nuclear gene that arose spontaneously generations ago among both parents’ Ashkenazi Jewish ancestors. Scores of different genes harbor mutations that may cause Leigh syndrome, by many different possible inheritance patterns. The mutation in this family was present on both copies of the same gene in both affected brothers, and was also seen in two other children in the study with Leigh syndrome who were not related to them.

Leigh syndrome, named after a British neuropsychologist who first described it in 1951, involves metabolic strokes deep in the brain, with a loss of skills from stressors such as fever, illness and anesthesia. It has historically had a high mortality rate in childhood or adolescence. Over 90 different genes necessary for mitochondria to function properly are now known to cause it, with disease-causing gene variants rooted in DNA, either within a cell’s nucleus or in the separate mitochondrial genome.

Falk and colleagues analyzed data from four subjects affected with Leigh syndrome who did not have a specific genetic diagnosis: the Barnett boys and two unrelated patients from Ashkenazi families now living with Leigh syndrome who are followed by the CHOP Mitochondrial Medicine Frontier Program. The team identified a common causative mutation in the nuclear gene USMG5, a gene not previously associated with any human disease. USMG5 encodes a protein component of complex V, the molecular motor within the mitochondrial energy system that directly generates ATP, each cell’s chemical energy currency.

The change in USMG5 is a founder mutation, one that originated by chance, most likely centuries ago in an unidentified individual from an Ashkenazi Jewish population, possibly in Eastern Europe. The mutation causes an autosomal recessive disease, so someone can carry the mutation in one of their pair of USMG5 genes without having disease symptoms. However, if both parents are mutation carriers — as is true of Marsha and Allen — each child has a 25 percent chance of inheriting the mutation on both copies of their gene, and being affected with Leigh syndrome. The youngest Barnett son, now 40 years old, does not have Leigh syndrome.

Nearly 30 years ago Marsha and Allen Barnett established a foundation to support research in mitochondrial disease, which subsequently supported the recruitment to CHOP of mitochondrial medicine pioneer Douglas C. Wallace, PhD, where he established the Center for Mitochondrial and Epigenomic Medicine in 2010. Wallace holds the Michael and Charles Barnett Endowed Chair in Pediatric Mitochondrial Medicine and Metabolic Disease.

Insights from the current research have implications for preventive medicine and genetic counseling, says Falk. She said the USMG5 mutation should be added to the list of mutations tested for at the time of prenatal genetic carrier screening in prospective Ashkenazi Jewish parents. The mutation is relatively common in the Ashkenazi population, where roughly 1 in 175 individuals are carriers. It should also be added to the list of genes to be evaluated in children with Leigh syndrome.

“What we’ve learned from these four children recognized to suffer from USMG5 deficiency will enable future children diagnosed with this condition to be very carefully monitored and managed when they face stressors such as fever or anesthesia, to avoid decompensation,” said Falk. Decompensation is a rapid medical deterioration that may occur when a patient’s system is stressed. In the longer run, Falk and other researchers are working to realize precision medicines for mitochondrial disease. In the future, children known to have this gene disorder may be able to receive treatments targeted to their specific disease.

“This work highlights the importance to families and medicine of continuing to work to solve cases that have never before been fully understood,” says Falk. “The current revolution in genomic sequencing methods, combined with highly collaborative research investigations to validate genetic leads, continues to deepen our knowledge of mitochondrial disease, and with it, precision diagnosis, counseling, management and therapies.”

Funding support for this study came from the National Institutes of Health (DK082446, GM008638, DK113250, and HD032062), the Angelina Foundation Fund, the Foerderer Award for Excellence, the Marriott Mitochondrial Disorders Clinical Research Network, the Nicholas Nunno Fund, the Mileti Fund, the Simons Foundation and the JPM Foundation.