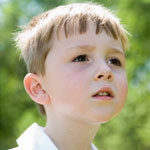 New data from the Centers for Disease Control and Prevention states that 1 in 68 American children has an autism spectrum disorder (ASD). While this news seems disheartening, research has shown that early diagnosis and intervention is the best way to support children who are diagnosed with autism.

Autism is a neurodevelopmental disorder that affects a child's social, cognitive and communication skills. Autism symptoms can range from mild to severe, and children are diagnosed along a spectrum. Children with autism are usually diagnosed around 2 to 3 years of age, but sometimes they are not diagnosed until elementary school, middle school or even adulthood.

Signs and symptoms of autism

In most cases, the signs of autism present themselves early, and the American Academy of Pediatrics calls for heightened awareness, early screening and intervention supports for families. Your child's pediatrician can start screening for autism at your baby's 18-month visit. However, you can recognize some of the signs of autism earlier. Here is what you should look for:

If your child shows any of the above behaviors, you should discuss it with your pediatrician and have your child screened for autism. Most children are screened at 18-24 months using the Modified Checklist for Autism in Toddlers, or the M-CHAT, which is a 23-question form. With this form, pediatricians can identify children at risk for ASD and recommend next steps for parents.

Parents should remember that screening is not a diagnosis. Even if your child’s screening results identify him as “at risk,” it doesn’t mean he will be diagnosed with an ASD. However, an early diagnosis, along with proper interventions, such as speech or occupational therapy, can help your child progress and may help to reduce challenging behaviors over time.