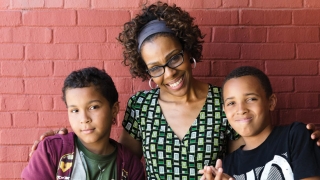 Tami Jackson, a school counselor at Taylor Elementary, helps students like Abdallah Burgos Ríos, 11 (left), and Angel Faña, 9. When one student bumps into another in the hallway and books go flying, what’s the initial reaction? For kids like fifth-grader Abdallah Burgos Ríos, the first thing that comes to mind is, “I want to punch him.”

That’s when Tami Jackson, a school counselor at Taylor Elementary in North Philadelphia, reminds Abdallah of the alternative behaviors they have been discussing and role-playing as part of the Coping Power Program, a behavioral health intervention that Children’s Hospital of Philadelphia has implemented in six local schools.

Jackson prompts: “Ask him why he bumped into you. It might have been an accident. Then ask him to help you pick up the books.”

The In-School Services 20school counselors/ social workers trained136children participated in counseling groups 15 children evaluated in school clinics 2015-16 school year students reenact the scene a few more times before the nonaggressive response comes easily — which is exactly the reason roleplaying is a frequent Coping Power exercise. “The kids love role-playing,” Jackson says, “and it works. They love to demonstrate and act out the skills they learn.”

The goal is for students with identified behavior disorders — usually verbal and physical aggression — to learn anger management, emotional awareness, appropriate social skills, problem solving and how to handle peer pressure while they’re still young. If they’re less disruptive in class, they and their classmates can get more out of school. Students are referred to Coping Power by their parents or teachers and screened by school counselors. Those who meet the criteria join a 14-week group evidence-based therapy session held during the school day.

CHOP psychologists from the Department of Child and Adolescent Psychiatry and Behavioral Sciences train the school counselors and offer support as part of a five-year research study that also includes another intervention, Friends for Life, which is geared toward kids with anxiety disorders that hinder their ability to make friends and participate in class.

“We can reach more students by training the schools’ own staff to work with kids with behavioral health and mental health problems,” says psychologist Ricardo Eiraldi, PhD, principal investigator and Program Director of CHOP’s Behavioral Health in Urban Schools Program. “We provide high-quality training in evidence-based practices to school counselors and social workers.”

Jackson learned how to be more effective after CHOP videotaped her interacting with the kids and gave feedback. “They gave me suggestions about how to say things differently or better,” she says. “They gave guidance each week before the lessons. It was really helpful.”

As the sessions unfold, she sees positive changes in students’ behavior in school. Parents also report progress. “I imagine they’ve helped him behave, be a good kid and to not be so spoiled,” says Meyoli Wilmo, whose son, Angel Faña, participated. “At home, he’s calmer.” 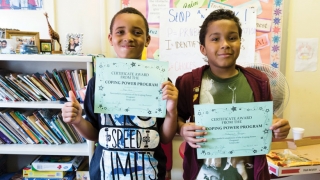 Angel and Abdallah proudly display their certificates for completing the program. Eiraldi’s program also trains community counselors who work in the schools under Medicaid contracts. Supervisors in community-based counseling programs receive training and ongoing consultation on how to support the counselors as they deliver evidence-based treatments.

“Research shows that if you provide the initial training and go away, it’s not as effective as when the supervisor is trained on how to better support the in-school providers,” Eiraldi says.

Second-year psychiatry fellows from CHOP also hold behavioral health clinics at Francis Scott Key Elementary in South Philly and Juniata Park Academy in Northeast Philadelphia for children who have been referred by school counselors and provide psychiatric consultations. The fellows might provide brief therapy to a child, but more often link the students to community-based providers (via agencies) or to CHOP.

“Access to evidence-based behavioral health services can make a lifelong difference for these children,” says Eiraldi, noting National Institute of Mental Health statistics that 13 percent of children ages 8 to 15 have a diagnosable mental disorder in any given year. “CHOP is dedicated to making services available in under-resourced areas.” 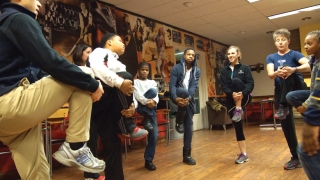 The Homeless Health Initiative expands its reach with new activities and health workshops throughout our region. 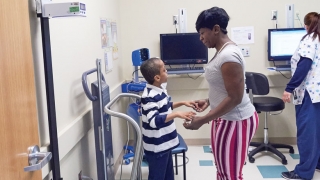 A special clinic sorts out health needs of children in foster care and creates a path for ongoing care. 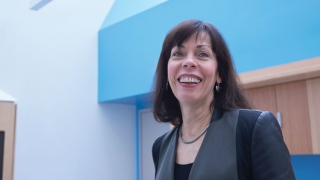 To Soothe and Heal

The Medical Behavioral Unit, with a concentrated approach to treating patients with behavioral issues, is meant to reduce anxiety and help patients safe while recovering at the Hospital.