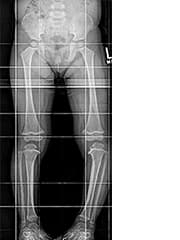 Figure 1: Pretreatment X-ray findings include severe or asymmetric bowing, varus centered at the proximal tibia, medial/ posterior sloping of the proximal tibial epiphysis, metaphyseal beaking, and possibly a congenital bony bar. TD is a 25-month-old female who presented to clinic with a complaint of bowed legs. Mom reports that throughout infancy, both legs were bowed, but the right one straightened out while the left appears to have worsened. She was an early walker at 10 months and is of Latino background. Mom feels she may intoe a bit more on the left as well. She does not appear to have pain and has met all her developmental milestone appropriately. She has no known nutritional deficiencies.

Genu varum, or bowed legs, is very common in the < 2-year-old age group. In normal physiology, infants can be in some amount of femoral-tibial varus, but generally transition to neutral by the age of 2. This then tends towards physiologic valgus peaking at around age 3 to 4, which generally decreases to adult alignment around the age of 7. For children in whom varus or valgus alignment persists past the normal physiologic age, or in whom other red flag signs or symptoms for pathology rather than normal physiology are present, further investigation must be conducted and other diagnoses considered.

Specifically, in this patient, the history and risk factors all guide us toward the diagnosis of infantile Blount’s disease (tibia vara), a pathologic form of genu varum in children. This typically presents in the 2- to 5-year-old age range and is due to an abnormality in growth of the medial proximal tibial physis. Our patient has multiple risk factors for the disorder, including being an early walker, being of Black or Latino background, and having a high bodyweight for her height.

Clinically, patients with infantile Blount’s present with genu varum that may appear more severe than expected, persists longer than one would expect for physiologic bowing (> age 2), is associated with other deformity (namely flexion and internal rotation), is asymmetric (although up to 50% may be bilateral), or is associated with a lateral thrust with walking.

In this patient, multiple elements of the history and physical alert us to potential pathology. The patient is slightly older than the typical age range for physiologic varus. Next, the asymmetry of the deformity is of concern, as physiologic varus is generally mild and symmetric. On exam, the lateral thrust and internal rotation are suggestive.

X-ray findings suggestive of Blount’s include severe or asymmetric bowing, varus centered at the proximal tibia, medial/posterior sloping of the proximal tibial epiphysis, metaphyseal beaking, and possibly a congenital bony bar. Patients may have compensatory femoral valgus. Specifically of prognostic value is the metaphyseal-diaphyseal angle (MDA), the angle between the perpendicular of the long axis of the tibia and the metaphyseal beaks at the level of the physis. If the MDA is > 16 degrees, there is a 95% chance of progression and treatment is warranted. If the MDA is < 10 degrees, 95% of cases resolve. If the MDA is 11 to 16 degrees, it should be closely observed. 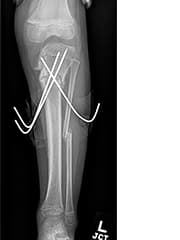 Figure 2: Postoperative image demonstrating correction after osteotomies of the tibia and fibula to realign the limb, fixed with percutaneous pins. Treatment depends on the age of the patient and the stage of disease. The Langenskiold classification assigns the deformity type I through type VI, with worsening prognosis at higher stages. Types I to IV represent worsening magnitude of metaphyseal beaking and sloping, whereas types V and VI include a congenital bar.

Patients aged 3 or younger with stage I or II disease can be treated with bracing with a knee-ankle-foot orthosis until bony changes resolve, which usually takes about 2 years.

In any patient presenting at age 4 or older, failing brace therapy, presenting with stage III to VI disease at any age, or having an MDA >20 degrees, the traditional treatment is a varus producing osteotomy with bony bar excision, if present. More recently, in younger patients without a bony bar, growth modulation by tethering with a plate has been tried, but this is only felt to be sufficient if neutral alignment can be achieved by age 4.

This patient was indicated for and underwent a proximal tibial osteotomy and correction. This is done by performing a cut in both the tibia and fibula and correcting the varus, flexion, and internal rotation components of the deformity. This can be corrected acutely and secured with either internal or percutaneous fixation as in this case (see Figure 2) or corrected gradually with an external frame. The goal is complete correction of the deformity and prevention of the abnormal gait, poor biomechanics, early arthritis, and possible severe disability that would otherwise be the natural history of this disease.

Conditions Treated by the Limb Program

The Limb Preservation and Reconstruction Program cares for children with a wide variety of conditions that affect their arms and legs.

The importance of intervening early is highlighted by the novel techniques available to prevent or delay hip dislocation in patients with cerebral palsy.