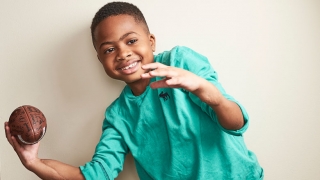 The first child to undergo a successful hand transplant also is the first child in whom scientists have detected massive changes in how sensations from the hands are represented in the brain. The brain reorganization is thought to have begun six years before the transplant, when the child had both hands amputated because of a severe infection during infancy. Notably, after he received transplanted hands, the patient’s brain reverted toward a more typical pattern.

Each area of the body that receives nerve sensations sends signals to a corresponding site in the brain. The spatial pattern in which those signals activate the brain’s neurons is called somatosensory representation—particular parts of the brain reflect specific parts of the body.

“We know from research in nonhuman primates and from brain imaging studies in adult patients that, following amputation, the brain remaps itself when it no longer receives input from the hands,” said first author William Gaetz, PhD, a radiology researcher in the Biomagnetic Imaging Laboratory at Children’s Hospital of Philadelphia (CHOP). “The brain area representing sensations from the lips shifts as much as 2 centimeters to the area formerly representing the hands.”

This brain remapping that occurs after upper limb amputation is called massive cortical reorganization (MCR). “We had hoped to see MCR in our patient, and indeed, we were the first to observe MCR in a child,” said Gaetz. “We were even more excited to observe what happened next—when the patient’s new hands started to recover function. For our patient, we found that the process is reversible.”

Researchers from Children’s Hospital of Philadelphia and the Perelman School of Medicine at the University of Pennsylvania published their findings today in the Annals of Clinical and Translational Neurology. Their case report described Zion Harvey, now 10 years old, who received worldwide media coverage two years ago as the first child to undergo a successful hand transplant.

A 40-member team led by L. Scott Levin, MD, FACS, Chairman of Orthopaedic Surgery and a Professor of Plastic Surgery at Penn Medicine, and Director of the Hand Transplantation Program at CHOP, performed that milestone surgery in July 2015 at CHOP. “Zion has been a child of many firsts here at Penn Medicine and Children’s Hospital of Philadelphia, and across the world,” said Levin, senior author of the paper. He added, “With the changes observed in his brain, which our collaborative team has been closely evaluating since his transplant two years ago, Zion is now the first child to exhibit brain mapping reorientation. This is a tremendous milestone not only for our team and our research, but for Zion himself. It is yet another marker of his amazing progress, and continued advancement with his new limbs.”

The researchers used magnetoencephalography (MEG), which measures magnetic activity in the brain, to detect the location, signal strength and timing of the patient’s responses to sensory stimuli applied lightly to his lips and fingers. They performed MEGs four times in the year following the bilateral hand transplant, performing similar tests on five healthy children who served as age-matched controls.

At the first two visits, the patient’s fingertips did not respond to tactile stimulation—being touched with a thin filament. When experimenters touched the patient’s lips, the MEG signal registered in the hand area of the brain’s cortex, but with a delay of 20 milliseconds compared to controls. At the two later visits, MEG signals from lip stimulation had returned to the lip region of the brain, with a normal response time—an indication that brain remapping was reverting to a more normal pattern.

When experimenters touched the patient’s fingertips in the two later visits, the MEG signals appeared in the hand region of the brain, with a shorter delay in response time from visit three to visit four, but with higher-than-normal signal strength. “The sensory signals are arriving in the correct location in the brain, but may not yet be getting fully integrated into the somatosensory network,” said Gaetz. “We expect that over time, these sensory responses will become more age-typical.”

Gaetz added, “These results have raised many new questions and generated excitement about brain plasticity, particularly in children. Some of those new questions include, what is the best age to get a hand transplant? Does MCR always occur after amputation? How does brain mapping look in people born without hands? Would we see MCR reverse in an adult, as we did in this patient? We are planning new research to investigate some of these questions.”

In the meantime, follow-up studies of this patient provide encouraging details on his functional abilities. “Our follow-up studies 18 months after this transplant showed that he is able to write, dress and feed himself more independently than before his operation—important considerations in improving his quality of life,” said Levin.

Penn Medicine is one of the world's leading academic medical centers, dedicated to the related missions of medical education, biomedical research, and excellence in patient care. Penn Medicine consists of the Raymond and Ruth Perelman School of Medicine at the University of Pennsylvania (founded in 1765 as the nation's first medical school) and the University of Pennsylvania Health System, which together form a $5.3 billion enterprise.

The Perelman School of Medicine has been ranked among the top five medical schools in the United States for the past 17 years, according to U.S. News & World Report's survey of research-oriented medical schools. The School is consistently among the nation's top recipients of funding from the National Institutes of Health, with $409 million awarded in the 2014 fiscal year.

Penn Medicine is committed to improving lives and health through a variety of community-based programs and activities. In fiscal year 2014, Penn Medicine provided $771 million to benefit our community.