When 47-year-old Janet began to cough up white mucus casts, the cause of her coughing spells were a mystery to many. At CHOP’s Center for Lymphatic Disorders and Lymphatic Research, Janet finally found the answers — and the treatment — she needed.

Different than most patients at Children’s Hospital of Philadelphia (CHOP), Janet was 47 when she first discovered the Jill and Mark Fishman Center for Lymphatic Disorders and Lymphatic Research. Born with tetralogy of Fallot, Janet had experienced three open heart surgeries and multiple cardiac ablations before the age of 30, but it wasn’t until 2020 that she began to face a new and unexpected medical challenge — plastic bronchitis.

Drowning in her sleep

Plastic bronchitis is a lymphatic flow disorder in which lymph fluid leaks into the airways, causing severe respiratory issues that include coughing fits and hypoxia. During these coughing fits, patients may cough up casts — rubbery, caulk-like plugs which block the patient’s airways, making it difficult to breathe and, in rare cases, leading to asphyxia.

Janet’s first coughing fit occurred on New Year’s Eve 2019. “I’ve always struggled with congestion and sinus infections,” she says, “but never anything like this.”

For the next few months, Janet would visit her local urgent care regularly. In many cases, however, early plastic bronchitis can resemble asthma or bronchitis. Janet would be prescribed antibiotics, steroids and nebulizer treatments, which would suppress her symptoms for a few days. Eventually, however, the coughing fits always returned and began to increase in severity.

Janet would cough up casts at least once a day — pink or white in color — along with bright yellow fluid. Once a cast dislodged, Janet’s symptoms would subside for few hours until the lymphatic fluid filling her lungs formed a new cast. “I felt like I was drowning,” she says. Unable to breathe lying down, Janet spent nights sitting up on her couch, her phone in hand, for fear a cast would become lodged in her throat and she would suffocate.

In February 2020, an urgent care physician discovered that Janet’s oxygen was low and recommended that she head straight to the emergency room.

Janet was admitted to a New York hospital — where she would spend the next two weeks — for  a presumed congenital heart failure exacerbation. Despite being treated with diuretics for fluid overload, Janet continued to suffer from coughing fits and shortness of breath. Several bronchoscopies were performed during her hospital stay, which found mucus plugging with obstruction of her right middle and right lower lobes. It wasn’t until Janet coughed up a large cast and showed it to her doctor, however, that the diagnosis of plastic bronchitis was made.

Released from the hospital with multiple nebulizer treatments and a compression vest to assist with airway clearance, Janet tried to return to her normal life. She still couldn’t lie down at night, however, and even though the COVID-19 pandemic allowed her to work from home, she often had to take time off from work after a sleepless night on the couch.

When a friend recommended the Jill and Mark Fishman Center for Lymphatic Disorders at CHOP, Janet reached out immediately. When her pulmonologist also referred Janet to the center, “I said ‘good,’” Janet remembers, “because I already called them.”

The first center of its kind, CHOP’s Jill and Mark Fishman Center for Lymphatic Disorders and Lymphatic Research provides highly specialized care for children and adults with lymphatic leaks and lymphatic flow disorders. With advanced imaging and interventional technologies developed at CHOP, the Lymphatics team is able to identify and manage these often misdiagnosed and difficult-to-treat conditions using a variety of minimally invasive treatment options. 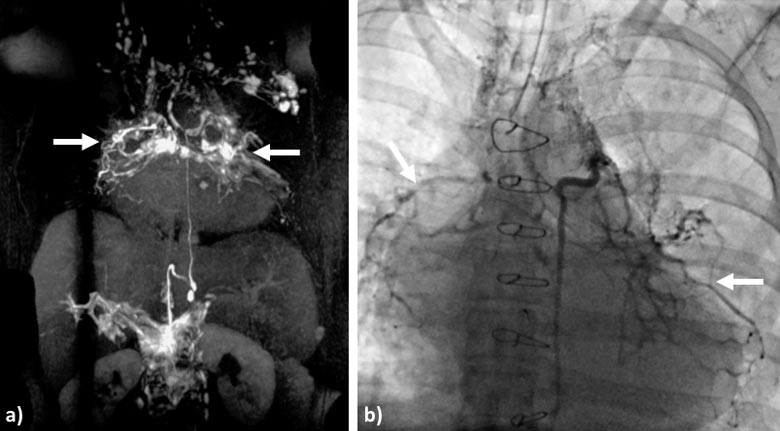 In April 2020, Yoav Dori, MD, PhD, Director of the Lymphatics Center, evaluated Janet via conference call. Janet was admitted to CHOP in May 2020, where a bronchoscopy and dynamic contrast magnetic resonance lymphangiography, which can visualize lymphatic abnormalities and the exact location of lymphatic leaks, confirmed her diagnosis.

The treatment for plastic bronchitis typically involves a procedure called selective lymphatic duct embolization — a minimally invasive treatment developed by CHOP experts — in which a clinician uses oil, coils, particles, glue or other bonding agents inserted through a catheter to seal the ducts. Janet’s lymphatic system had so many leaks, however, that she underwent a full thoracic duct embolization. This complete embolization should prevent further leaks going forward.

After Janet’s procedure she was able to return home, where she will no longer need to use the compression vest or the nebulizer. Her primary cardiologist will handle her care moving forward. She reports that she hasn’t experienced any coughing fits, and most importantly, she’s been able to sleep lying down.

To request an appointment or second opinion, or to refer a patient, call 267-426-9600 or contact us online.