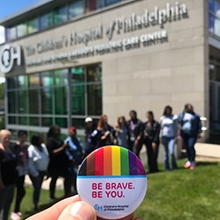 June is LGBTQ Pride Month in Philadelphia, and Children’s Hospital of Philadelphia (CHOP) recognizes and supports LGBTQ patients, families and staff every day, all year round. LGBT Pride Month is celebrated each year in the month of June to honor the 1969 Stonewall riots in Manhattan, NY. The Stonewall riots were a tipping point for the Gay Liberation Movement in the United States. In the United States, the last Sunday in June was initially celebrated as “Gay Pride Day,” but the actual day was flexible. In major cities across the nation the “day” soon grew to encompass a monthlong series of events. Learn more about the history of LGBT Pride Month from the Library of Congress.

Here is a brief mention of just some of our programs, efforts and community celebrations.