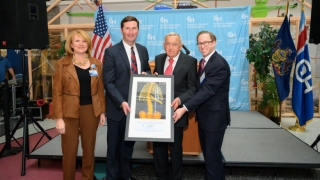 Children’s Hospital of Philadelphia (CHOP) is honored to announce a generous gift of $5 million from the Wyss Medical Foundation to support thoracic insufficiency syndrome (TIS) patient care, innovative research and education at CHOP. This gift will also honor the legacy of the late Dr. Robert Campbell, a world-renowned pediatric orthopedic surgeon at CHOP. This gift will rename CHOP’s Center for Thoracic Insufficiency Syndrome to the Wyss/Campbell Center for Thoracic Insufficiency Syndrome for the next five years. “We are greatly thankful for the Wyss Medical Foundation and its commitment to helping children with TIS,” said John Flynn, MD, Richard M. Armstrong Jr. Endowed Chair in Pediatric Orthopedic Surgery, and Chief of the Division of Orthopedics at CHOP. “Their philanthropic support will honor Dr. Campbell’s vision and help us build an even brighter future for TIS patients through pioneering clinical care, research and technological advancements.”

Hansjörg Wyss, Chairman of the Wyss Medical Foundation, and Dr. Campbell began their partnership in the late 1980s when Dr. Campbell created the initial prototype for a novel device called the vertical expandable prosthetic titanium rod (VEPTR). Dr. Campbell believed the device could save the lives of children with TIS, a complex spine and chest wall condition that affects normal breathing and lung growth. When Dr. Campbell tried to turn his idea into a reality, manufacturers rejected his invention. It was Wyss, who also is an orthopedic device manufacturer, who saw the lifesaving potential of VEPTR and agreed to manufacture the device. Over the next 25 years, Dr. Campbell and the clinicians he trained implanted the VEPTR device, manufactured by Wyss’ company, to save the lives of thousands of children with TIS. Today, the VEPTR is the only FDA-approved device to treat TIS.

In 2008, Dr. Campbell was recruited to CHOP to build the Center for Thoracic Insufficiency Syndrome, the first national, multidisciplinary program devoted solely to the treatment of TIS. Dr. Campbell’s invention became the standard of care throughout the world, saving or extending the lives of children with previously untreatable conditions. CHOP performs more than 200 VEPTR and other growth-sparing procedures each year.

Dr. Campbell has left a lasting impact through ideas, inventions, and the many surgeons and physicians he trained. Hansjörg Wyss wished to honor Dr. Campbell’s legacy and the men’s longtime friendship, and vowed to support CHOP, enabling the team to continue to advance healthcare for children with TIS.

“Bob had a remarkable career. He truly devoted his life to helping children survive and thrive,” said Wyss. “I’m proud to support the Center and honor Bob’s legacy in this way. His visionary approach is the foundation for the center as it is known today.”

The Wyss/Campbell Center for Thoracic Insufficiency Syndrome is led by Dr. Patrick J. Cahill, an attending physician in the Division of Orthopaedics and the Robert M. Campbell Jr. Endowed Chair in Thoracic Insufficiency Syndrome at CHOP. The center is one of CHOP’s frontier programs, a trailblazing group of initiatives pioneering new advances in children’s health by conducting visionary research that translates into cutting-edge clinical care.