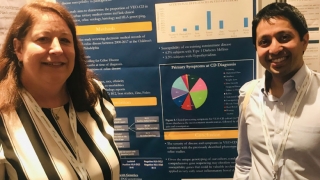 From September 7-9, 2019, members of Children’s Hospital of Philadelphia’s (CHOP) Center for Celiac Disease team attended the International Celiac Disease Symposium in Paris, France. The Center is part of CHOP’s Division of Gastroenterology, Hepatology and Nutrition.

Led by Dr. Arunjot Singh and Patricia Bierly, NP, the team presented four abstracts and posters at the symposium, which is the largest international gathering of physicians, dietitians, researchers, and academics in the field of celiac disease.

Our experts spoke to colleagues from across the globe on important topics, including the classic rash of dermatitis herpetiformis; a case for early diagnosis of celiac disease and the potential to prevent co-existing autoimmune conditions; the genetic links and clinical manifestations in very early onset celiac disease; and comparing celiac serology versus biopsy to evaluate intestinal healing.

“At CHOP, we are world leaders in the treatment and management of pediatric celiac disease and have some of the highest patient volumes nationally,” said Dr. Singh, co-medical director of CHOP’s Center.  “Our patient volume allows us to conduct robust research that we are able to present to colleagues from around the world at conferences of this caliber.”

The Center for Celiac Disease at CHOP is one of the largest and most comprehensive of its kind in the US. Opened in 2006, the Center is run by a team of dedicated gastroenterologists, pediatric nurse practitioners, registered nurses, registered dietitians, psychologists and researchers. “Caring for the entire family is what sets our Center apart. Education and training is provided to patients, parents and other caregivers,” says Patricia Bierly. “There is a genetic predisposition to celiac disease and we encourage the whole family get screened before symptoms or complications arise.”

Celiac disease affects 1% of the worldwide population and over 3 million people in the United States – many of which remain undiagnosed. “Given the number of children affected and the social impact celiac disease has, opportunities to collaborate and learn at the International Celiac Disease Symposium are vital to finding a cure,” added Singh.