Researchers at Children’s Hospital of Philadelphia (CHOP) have identified a key target that may be responsible for treatment failure in about 30% of patients with hemophilia A. The target, known as B cell activating factor (BAFF), appears to promote antibodies against and inhibitors of the missing blood clotting factor that is given to these patients to control their bleeding episodes. The findings, published in the Journal of Clinical Investigation, raise the possibility of using anti-BAFF therapies, potentially in combination with immune tolerance therapies, to tame the immune response in some patients with severe hemophilia A.

Hemophilia A is the most common inherited bleeding disorder, affecting 1 in 10,000 men worldwide. The condition is the result of a missing coagulation factor known as factor VIII (FVIII), which leads to uncontrolled bleeding episodes, joint disease, and increased risk of death. To control the disease, patients receive infusions of the FVIII protein to replace the missing coagulation factor, but for reasons scientists haven’t fully understood, approximately 30% of patients with severe hemophilia A develop neutralizing antibodies known as FVIII inhibitors that prevent the treatment from working, which negatively affects disease management.

Some patients resistant to FVIII protein replacement therapy receive immune tolerance induction (ITI), wherein high doses of FVIII are given over a period of one to two years to build up tolerance. However, ITI is demanding on patients and families, and the treatment – which is both costly and invasive – isn’t always effective.

To both uncover the mechanism behind the anti-FVIII immune response and expose a potential target, the researchers explored the possible role of BAFF in regulating FVIII inhibitors. Prior studies have shown that high plasma BAFF levels are implicated in some autoimmune diseases, as well as antibody-mediated transplant rejections. Using both adult and pediatric hemophilia A patient samples and hemophilia A mouse models, the researchers explored their hypothesis that BAFF may play a role in the generation and maintenance of FVIII antibodies. 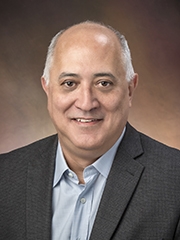 Valder R. Arruda, MD, PhD The research team, led by CHOP and Indiana University School of Medicine, found that BAFF levels were elevated in pediatric and adult patients who were resistant to FVIII replacement therapy; after successful ITI, those BAFF levels decreased to levels similar to non-inhibitor patients. In patients for whom ITI was unsuccessful, BAFF levels remained elevated. Working in mouse models, the researchers found that giving the mice prophylactic anti-BAFF therapy before FVIII treatment prevented inhibitors. In mice with established inhibitors, the researchers found that treating the mice with both anti-BAFF and rituximab, a chimeric antibody that depletes mature B cells, dramatically reduced FVIII inhibitor titers by, at least in part, reducing FVIII-specific plasma cells.

“Our data suggest that BAFF may regulate the generation and maintenance of FVIII inhibitors, as well as anti-FVIII B cells,” said co-senior author Valder R. Arruda, MD, PhD, a researcher in the Division of Hematology at CHOP and director of CHOP’s NIH-funded Center for the Investigation of Factor VIII Immunogenicity. “Given that an FDA-approved anti-BAFF antibody is currently used to suppress the immune response in autoimmune diseases, future research should explore the use of this treatment in combination with rituximab to achieve better outcomes for hemophilia A patients resistant to FVIII protein replacement therapy.”