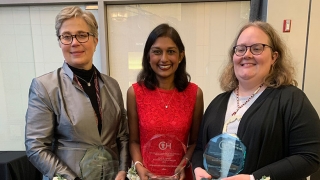 The Department of Pediatrics established the Master Clinician Award 13 years ago to honor those who provide superb care and exemplify collegiality. The awardees have earned a reputation for taking joy in their work, supporting coordinated care for patients and making extra efforts to be sure that patients are accommodated. There were 38 nominees for this year’s award.

“The depth and breadth of the level of expertise at CHOP has continued to grow,” said Alan R. Cohen, MD, hematologist, and former Physician-in-Chief in the Department of Pediatrics at CHOP. “This award is designed to honor those who see the most complicated patients in the world.”

Christina A. Bergqvist, MD, pediatric neurologist with the Division of Neurology and medical director of the Dietary Treatment Program at CHOP, began her career at CHOP as a resident in 1994. She was appointed director of the Ketogenic Diet(s) Program in 1999, a program that is recognized as the world’s largest ketogenic diet program, treating more than 900 children. Her research interests have focused on improving patient education, keto diet management and understanding the multiple effects of these diets.  Bergqvist has also contributed to more than 100 publications and books, and has mentored numerous pediatric and child-neurology residents and fellows.

“As patient care becomes a bit transactional at times, Christina refuses to forget the human side of patient care,” said Dennis Dlugos, MD, MSCE, pediatric neurologist at CHOP. “For 25 years she has refused to forget that. Combine those unparalleled people skills with the clinical expertise to build the best epilepsy dietary program in the world, and you have Christina.”

Jennifer M. Hwang, MD, MHS attending physician with the Justin Michael Ingerman Center for Palliative Care team, completed her medical training at Michigan State residency and then was a pediatric resident and chief resident at CHOP.  After residency, she was a hospitalist in oncology, where she fostered her love of patient-family communication, symptom management, and teaching.  She transitioned to full-time practice in palliative care and became one of the earliest board certified pediatric palliative care physicians in the country in 2010.

“Jen always takes the time to really listen,” said Wynne Morrison, MD, MBE, director of the Center for Palliative Care. “Whether that’s to a patient, a family member or a team member, she cares about the people and she really listens.”

Rushani W. Saltzman, MD, attending physician with the Division of Allergy and Immunology, started at CHOP in 2005 as an intern in General Pediatrics. While she enjoys all aspects of care in Allergy and Immunology, she has a special interest in food allergies, including food desensitization protocols. In addition to participating in patient care, Saltzman enjoys teaching and outreach.  She works with medical students as well as residents and fellows not only at CHOP, but from community programs as well.

“Rushani very quickly moved into clinical research because she was able to change the lives of kids,” said Kathleen Sullivan, MD, PhD, chief of the Division of Allergy and Immunology at CHOP. “She participated in many clinical trials including piloting an effort to cure children of food allergies and she was instrumental in this and is still curing children today. She turned a clinical trial into something personal, and it exemplifies who she is - she is what a pediatric doctor should be.”