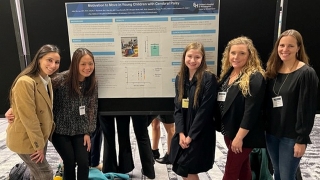 For children with motor impairments, physical therapy is an important intervention that can help improve function and independence. At the Academy of Pediatric Physical Therapy Annual Conference (APPTAC) this year, rehabilitation researchers from Children Hospital of Philadelphia (CHOP) presented six abstracts on measuring key “ingredients” for successful pediatric physical therapy, including one abstract that won the APPTAC “Top Abstract” award.

The research focused on six components of pediatric physical therapy:

Ultimately, the researchers hope to understand which components of motor practice – and how much of each – are related to better outcomes, so that in the future, physical therapists can maximize the benefit of therapy sessions for children with movement disorders.