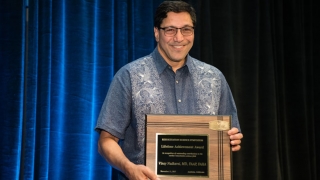 The American Heart Association (AHA) has chosen Vinay Nadkarni, MD, FAAP, FAHA, to receive this year’s Award for Lifetime Achievement in Cardiac Arrest Resuscitation Science. Dr. Nadkarni holds an endowed chair in Critical Care Medicine at Children’s Hospital of Philadelphia (CHOP) and is the Director of the CHOP Center for Simulation, Advanced Education and Innovation. The Lifetime Achievement Award is presented annually to recognize an individual for outstanding sustained contributions to the cardiac arrest resuscitation science field.

“CPR has been the primary focus of my research and advocacy efforts for the duration of my career,” said Dr. Nadkarni. “As a critical care physician, I see the benefits of CPR every day and the ramifications that occur when it is not administered. It’s been my life’s work to study and improve CPR to save more lives, across the life cycle from infancy to the elderly.”

Dr. Nadkarni served as Chair of the International Liaison Committee on Resuscitation from 2007 to 2016, and was chairman of the AHA Emergency Cardiovascular Care Committee from 2006 to 2010. He has authored more than 400 peer-reviewed manuscripts and 35 book chapters related to the practice of CPR, critical care and resuscitation science. He has conducted several collaborative multi-center NIH research grants, and was the founding pediatric member of the American Heart Association’s National Registry of CPR in more than 350 hospitals nationwide and the AHRQ-funded National Emergency Airway Registry for Children across 30 hospitals in the United States. He has also served on the board of directors of the World Federation of Pediatric Intensive and Critical Care Societies. Additionally, he serves as the founding Senior Chair and mentor for the 106-site International Network for Simulation-based Pediatric Innovation, Research and Education (INSPIRE) investigators. Along with collaborative partners including the American Heart Association, Zoll Foundation and Laerdal Foundation, Dr. Nadkarni has assembled robust clinical, laboratory and simulation-based resuscitation learning laboratories that include live-capture of resuscitation events to inform practice and help pioneer next generation resuscitation care.

“I can think of no better person to receive this award,” said Bryan Wolf, MD, PhD, Chief Scientific Officer and Chair of the Department of Biomedical and Health Informatics at CHOP. “Dr. Nadkarni and his team continue to play an important role in guiding how pediatric hospitals handle pediatric CPR. His dedication to the field is clear from the impact it has on science and the lives of children who have been saved by high-quality CPR.”