Aplastic anemia (AA) is a life-threatening bone marrow disorder caused by the autoimmune destruction of hematopoietic stem and progenitor cells (HSPCs). Currently, the condition is a diagnosis of exclusion, as there are no diagnostic tests specific to AA to differentiate it from other disorders, including inherited bone marrow failure syndromes (IBMFSs), which share similar symptoms. However, the process of excluding other diagnoses takes several weeks and can delay treatment, highlighting the need for a fast and accurate diagnostic test specific to the disorder. 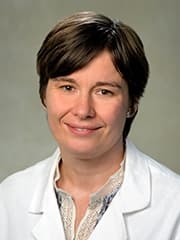 Daria V. Babushok, MD, PhD To test their hypothesis, the researchers analyzed lab samples from 454 pediatric and adult patients with AA, IBMFSs, and other hematologic diseases. They found that PNH and acquired 6p CN-LOH clones encompassing HLA genes have 100% positive predictive value for AA and can facilitate diagnosis in approximately half of AA patients. Conversely, they found that clonal TRG rearrangement is not specific for AA.

“Our analysis demonstrates that PNH and 6p CN-LOH clones effectively distinguish AA from IBMFSs, and both measures should be incorporated early in the diagnostic evaluation of suspected AA,” said senior study author Daria V. Babushok, MD, PhD, a physician-scientist in the Comprehensive Bone Marrow Failure Center at Children's Hospital of Philadelphia and the University of Pennsylvania. “The next frontier in BMF diagnostics will include combining these two assays with more sophisticated T-cell analyses and faster, more comprehensive somatic and germline genetic studies to improve the accuracy and efficiency of diagnosis of acquired and inherited BMF disorders.”

Learn more about this study, which was recently published in Blood Advances.