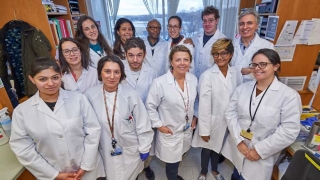 Researchers at Children’s Hospital of Philadelphia (CHOP) have developed a gene therapy vector for blood disorders like sickle cell disease and beta-thalassemia that is potentially safer and more effective than those currently used in gene therapy trials for those conditions. The vector, an engineered vehicle for delivering functional copies of the hemoglobin gene to correct a genetic abnormality, leads to the production of more hemoglobin with a lower dose, minimizing the risk of toxic side effects.

The findings were published today in Molecular Therapy.

“These results have many potential benefits for the successful treatment of patients affected by beta-globinopathies like sickle cell disease and beta-thalassemia, including a better dose response, a minimized chance of clonal expansion and tumorigenesis, a reduced cost of therapy, and a potentially reduced need for chemotherapy or radiation before beginning gene therapy,” said Laura Breda, PhD, research assistant professor at CHOP and first author of the paper. “All of us in the CuRED Frontier Program at CHOP are dedicated to finding new and improved curative therapies for blood disorders, and we look forward to taking steps to move this vector into clinical trials.”

Sickle cell disease and beta-thalassemia are genetic blood disorders caused by errors in the genes for hemoglobin, a protein consisting of globin and iron-containing subunits that is found in red blood cells and carries oxygen from the lungs to tissues throughout the body. The disorders, sometimes referred to as beta-globinopathies due to mutations in the beta-globin gene, lead to serious health complications, ranging from delayed growth and jaundice to pain crises, pulmonary hypertension, and stroke.

Because children with beta-globinopathies have two abnormal copies of the hemoglobin gene – one from each parent – researchers have explored gene therapy as a potential breakthrough treatment. Using an engineered carrier called a vector to introduce a functional copy of the beta-globin gene, this therapy has the potential to restore normal hemoglobin production in patients with beta-globinopathies. However, there are challenges to this approach, including limited dose response, dose-related toxicities, and the need in many cases for myeloablation, a procedure in which the bone marrow is suppressed via chemotherapy or radiation before gene therapy can begin.

In order to reduce unwanted side effects and increase effectiveness of gene therapy for these conditions, the CHOP researchers developed a new vector using an engineered lentivirus, the same retrovirus used to create gene therapy vectors in ongoing gene therapy trials for beta-globinopathies. The lentiviral vectors currently in use all contain the human beta-globin gene along with its promoter; three so-called hypersensitive sites that are important for gene transcription; and a truncated version of intron 2, which does not code for proteins.

The CHOP researchers hypothesized that including the full intron, rather than a truncated one, in addition to other genomic elements that promote uniform expression of the beta-globin gene would enhance beta-globin – and thus functional hemoglobin – expression. Based on this hypothesis, the research team generated five novel lentiviral vectors by combining different additional genomic elements. As a benchmark, they also generated three vectors similar to those that have already been used in clinical trials, which they used to compare to their novel vectors.

Using a variety of in vitro and in vivo screening approaches, the researchers found that one of their vectors, ALS20, expressed significantly higher transgenic hemoglobin levels than other vectors currently used to treat beta-globinopathies. Compared with the three benchmark vectors, ALS20 produced 157%, 84%, and 40% more adult hemoglobin, which would have a greater clinical impact on patients, especially those who require higher hemoglobin production to become transfusion independent. ALS20 was also more powerful, with a lower dose providing higher hemoglobin production, which could reduce the need for myeloablation and possibly allow for in vivo delivery methods.

From a safety standpoint, ALS20 viral particles did not contain unwanted genomic RNA byproducts, and mice treated with ALS20 exhibited normal physiology without any proliferative disorders or cancerous formations compared with controls. 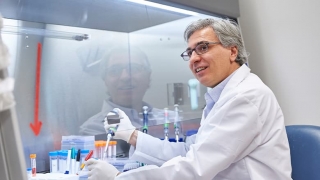 Stefano Rivella, PhD, senior study author “Considering the body of evidence presented in this work, we believe that ALS20 is an outstanding candidate for the successful treatment of beta-globinopathies,” said senior author Stefano Rivella, PhD, Kwame Ohene-Frempong Chair on Sickle Cell Anemia and Professor of Pediatrics at CHOP. “Our vector may not only provide safer therapy with a reduced probability of genome toxicity and milder conditioning requirements, but it may also improve the efficacy and offer a competitive product for the gene therapy market.”

The research was supported by the Comprehensive Center for the Cure of Sickle Cell Disease and other Red Cell Disorders (CuRED) – Frontier Program at CHOP, the Commonwealth Universal Research Enhancement Program (CURE) – Department of Health of Pennsylvania, and the Associazione Veneta per la Lotta alla Talassemia (AVLT). The team also received support through private donations, including those from the 2018 CHOP Daisy Days campaign and The Runway.