As part of a landmark package of scientific papers coordinated by NASA, researchers at Children’s Hospital of Philadelphia (CHOP) have described significant changes in mitochondrial function due to spaceflight, leading to numerous health risks. The study, “Comprehensive Multi-Omics Analysis Reveals Mitochondrial Stress as a Central Hub for Spaceflight Biological Impact,” published in Cell, is one of 29 papers released today across five Cell Press journals that assess the impact of space on human health. 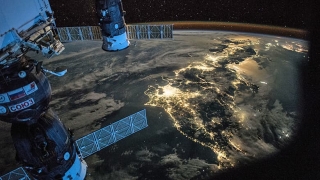 The city lights spanning Japan, glimmering below Earth’s thin atmosphere, as well as the International Space Station with a docked Soyuz Space Capsule. Photograph by Scott Kelly. Researchers from CHOP’s Department of Biomedical and Health Informatics (DBHi) and the Center for Mitochondrial and Epigenomic Medicine (CMEM) processed and analyzed transcriptomic and proteomic data from NASA’s GeneLab, a database that includes hundreds of samples from organisms flown in space. They tested more than a dozen tissues from mice, including liver, muscle, kidney, eye, and adrenal gland.

Using a data-driven approach to model and compare molecular data from the tissues, the researchers found that systemic shifts in metabolic and mitochondrial functions especially occur in liver and muscle tissue during spaceflight, supporting earlier reports on this phenomenon that have not yet been fully characterized. These shifts likely contribute to the observed challenges to astronaut health, including permanent hair loss, muscle loss, sleep disorders, and elevations in total cholesterol due to changes in lipid metabolism.

“Although we do not know the exact origins of these metabolic changes, the findings are an important step in better characterizing the impact of spaceflight on human health,” said Deanne Taylor, PhD, Director of Bioinformatics at DBHi and co-senior author of the paper. “CHOP’s leadership in Mitochondrial Medicine and Bioinformatics was critical in conducting this important research. These findings will help guide the scientific community’s research to mitigate spaceflight-associated health risks and develop appropriate countermeasures.”