Researchers at Children’s Hospital of Philadelphia (CHOP) have identified key characteristics of Multisystem Inflammatory Syndrome in Children (MIS-C), a condition causing hyperinflammation that is potentially driven by a disordered immunological response following SARS-CoV-2 infection. They recently described their findings in a case series in the Journal of the Pediatric Infectious Disease Society, profiling six critically ill children with MIS-C.

In comparing the six cases, researchers found consistent symptoms of the syndrome include fever, diarrhea, and shock. Other symptoms, which were observed in some but not all patients, included rash, conjunctivitis, swelling of the extremities, and mucous membrane changes.

Although some of the symptoms in MIS-C are similar to those in Kawasaki disease, an illness that causes blood vessel inflammation throughout the body, the researchers found several symptoms among the patients in the case study that may distinguish MIS-C from Kawasaki disease. Patients in the case series often had severe gastrointestinal symptoms (for example, diarrhea and abdominal pain), heart failure, and low platelet counts, whereas patients with classic Kawasaki disease tend not to suffer from diarrhea and heart failure and tend to have high platelet counts rather than low ones.

Many of the clinical features described in the report were consistent with other MIS-C case studies, but the research team highlighted two novel findings. Four of the six patients developed neurological symptoms, ranging from headache to aseptic meningitis, and all six patients had low sodium levels. 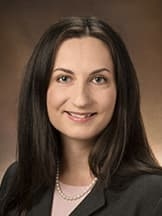 Kathleen Chiotos, MD Most of the patients were successfully treated with steroids and intravenous immunoglobulin (IVIG), and five of the six patients had been discharged from the hospital at the time of publication.

“Additional epidemiologic and clinical data are needed to measure the prevalence of this condition, refine the diagnostic criteria, and define optimal therapies,” said first author Kathleen Chiotos, MD, Medical Director of the CHOP Antimicrobial Stewardship Program and an attending physician in CHOP’s Pediatric Sepsis Program and the Division of Critical Care Medicine.

To learn more about how CHOP is responding to the COVID-19 pandemic and ways you can keep your family safe, click here.