Modifying bioprosthetic heart valves (BHV) with a biocompatible, nonimmunogenic, and oxidation-resistant polymer prevents structural degeneration of the valve, according to a new study by researchers in the Pediatric Heart Valve Center at Children’s Hospital of Philadelphia (CHOP), in collaboration with researchers at Columbia University and the University of Pennsylvania. The study, published today in the Proceedings of the National Academy of Sciences, demonstrates the potential of using poly-2-methyl-2-oxazoline (POZ) to make BHVs last longer, reducing patients’ risk of reoperation. 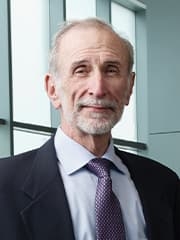 Robert J. Levy, MD “These findings provide a potential strategy for preventing structural valve degeneration of bioprosthetic heart valves,” said Robert J. Levy, MD, attending cardiologist in the Cardiac Center and the William J. Rashkind Endowed Chair in Pediatric Cardiology at Children's Hospital of Philadelphia. “The results of these investigations could be the basis for a novel approach that could improve the durability of these widely used devices and address a major unmet need.”

Heart valve disease, typically involving the mitral or aortic valve, affects millions of patients worldwide. With no effective medical therapy to treat the condition, the disease is often treated with the implantation of either bioprosthetic or mechanical valve prostheses. Bioprosthetic heart valves (BHV), fabricated from materials like bovine pericardium (BP), are less likely to cause blood clots and thus have advantages over mechanical valves. However, the longevity of these implants is limited due to structural valve degeneration (SVD). This degeneration often involves calcification, but recent studies have also shown that the accumulation of advanced glycation end products (AGE) and AGE-modified serum proteins also plays a role.

The research team therefore explored the option of modifying a BP-derived BHV with a polymer to increase its robustness. They ultimately chose to study POZ, a polymer that shares similarities with polyethylene glycol (PEG) but does not have its propensity for both eliciting an immune response and degradation due to oxidization. POZ has been shown to prevent serum protein adsorption and mitigate cell adhesion to modified glass surfaces, but prior to this study, POZ had not been investigated in bioprosthetic heart valve formulations.

In their study, the researchers showed that not only could POZ be successfully incorporated into BHV biomaterials, but POZ also significantly reduced serum protein infiltration and AGE formation in vitro. Using an animal model, they showed that POZ performed the same functions in vivo. Although the modified BHV did not prevent calcification, incubating the BP with ethanol followed by POZ modification before implantation significantly reduced calcification as well as AGE-serum protein accumulation. The BHVs were also more biocompatible than either unmodified counterparts or those modified with PEG.

Read more about the study here.