Neurobiology researchers have identified a pathway in brain circuitry that, when stimulated, leads to “antidepressive” behavior in animals. If such brain stimulation proves to have similar effects in people, it may eventually lead to a novel treatment for depression. 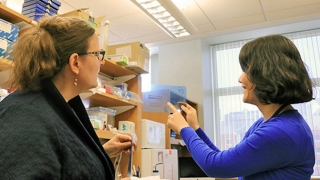 “Major depressive disorder is a serious health problem worldwide. Existing treatments are helpful for many people, but also have a high rate of relapse and significant side effects,” said study leader Amelia J. Eisch, PhD, a neurobiology researcher at Children’s Hospital of Philadelphia (CHOP). “Because scientists consider depression to be caused by malfunctions in brain circuitry, we suggest that ‘tuning’ a specific circuit could set the stage for a targeted treatment.” Eisch and first author Sanghee Yun, PhD, both from the Department of Anesthesiology and Critical Care at CHOP, collaborated with other scientists in a study published online today in Nature Medicine.

The study team focused on a circuit upstream from the hippocampus, a brain region linked to mood regulation and memory. Previous researchers found that directly stimulating the human hippocampus had no effect on memory or made memory worse. The current study instead targeted a region upstream from the hippocampus, the entorhinal cortex (Ent) in laboratory mice. The researchers examined depressive-like behavior as well as memory.

In animal studies and human research, scientists already knew that stimulating the Ent circuit improves memory and learning. “Our group was the first to investigate whether stimulating Ent could affect mood,” said Yun.

Yun identified a protein in the Ent-hippocampal pathway, called TRIP8b, that increases during stress, and inhibits cell firing. In the current study, the researchers used mice genetically engineered to “knock down” or eliminate TRIP8b in Ent neurons. Ent neurons in those mice were more likely to fire, and produced new hippocampal neurons at a faster rate.

Crucially, the mice with greater stimulation in their Ent circuits showed “antidepressive” behaviors. In testing this mouse model of depression, the study team put the animals through a battery of experiments.

“There are many mouse behavioral tests we used to identify antidepressive-like behavior,” said Eisch. For instance, in a forced swim test, a researcher observes how a mouse behaves after being placed in a beaker of water. The mouse keeps moving until it becomes immobile and floats; a shorter duration of immobility signifies antidepressive behavior. In a novelty-suppressed feeding test, a mouse that is less anxious approaches a food pellet faster than an anxious mouse; the researchers regard mice that more readily approach something pleasurable as showing more antidepressive behavior.

“Our findings are the first evidence that targeting this particular brain circuit may offer a potential new depression treatment,” said Yun. “This is a first step, so there is much research to be done to determine if we can translate this knowledge into practical, noninvasive treatments for people with depression,” said Eisch. She added, “Existing brain stimulation therapies for depression are extremely helpful for many patients, but they don’t work for everyone, and they also have side effects such as memory loss and cognitive impairment. It is important to increase the number of tools available to treat depression, and find those with fewer side effects as well.”  She added that her team hopes the new study presents opportunities to collaborate with translational researchers in pursuing promising implications for clinical treatments.

In addition to their CHOP positions, Eisch and Yun are also on the faculty of the Perelman School of Medicine at the University of Pennsylvania.

Funding support for this research came from the National Institutes of Health (grants DA023701, DA023555, MH107945, NS059934 and MH104471), the National Aeronautics and Space Administration, and the National Alliance for Research on Schizophrenia and Depression.