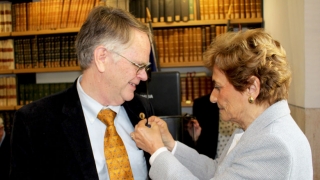 Dr. Emilia Chiancone, president of the Italian Academy of Sciences, welcomes Dr. Wallace in a ceremony in Rome. Douglas C. Wallace, PhD, director of the Center for Mitochondrial and Epigenomic Medicine at The Children’s Hospital of Philadelphia, was inducted into the Italian Academy of Sciences during the Academy’s 234th annual meeting on May 5 in Rome. Dr. Emilia Chiancone, as president of the Academy, conducted the ceremony inducting Dr. Wallace as a foreign member of the organization.

Founded in 1782 as the Italian Society, the Italian Academy of Sciences has a mission of encouraging scientific research and disseminating the progress of science to schools and the general public. Its membership is limited to 40 Italian scientists and 25 foreign members. During the Academy’s long history, it has welcomed as members Albert Einstein, Benjamin Franklin, Louis Pasteur, Alessandro Volta, Rita Levi-Montalcini, Wilhelm Roentgen, Enrico Fermi and many other internationally prominent scientists.