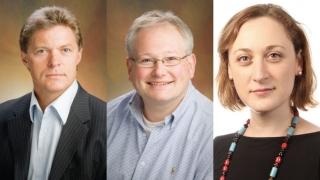 Drs. Hakonarson, Grant, and Cousminer Children’s Hospital of Philadelphia (CHOP) researchers participated in the largest study to date analyzing how genes from both mothers and babies affect a child’s birth weight. Understanding these influences is important because relatively high or low birth weights are known to track with an increased lifelong effect on health, raising risks of high blood pressure and metabolic diseases, such as type 2 diabetes.

The study, bringing together over 200 scientists from 20 nations in the Early Growth Genetics (EGG) Consortium, appeared May 1, 2019, in the journal Nature Genetics. Rachel M. Freathy, PhD, of the University of Exeter, U.K., and four colleagues, from the Universities of Cambridge, Oxford and Bristol, co-led the study.

The study team performed genome-wide association studies and other analyses of genetic data from 200,000 mothers, as well as birth weights of their children, along with genetic data and birth weights from 321,000 individuals from the UK Biobank and the EGG Consortium. The Center for Applied Genomics contributed data to this EGG effort.

The researchers identified 190 genetic signals from variants affecting birth weight, of which 129 signals were new discoveries. Notably, the team also used novel statistical techniques to separate the respective contributions of the mothers’ genes and the babies’ genes to the babies’ birthweight. For some influences, the mother’s genes and baby’s genes exert effects in opposite directions, which the Exeter scientists likened in a news release to “a mother-baby tug of war.” The researchers also demonstrated that some of the mother’s genes were not inherited by the baby, but did influence the baby’s uterine environment during pregnancy.

Size at birth influences diseases in later life, noted Grant, who led a 2012 EGG Consortium study that identified two novel gene variants that raise the risk of common childhood obesity. “The current study supports the importance of optimizing maternal-fetal health so that newborns have the healthiest birth weight possible,” he said. He added that improvements in care may draw on future medical interventions using a precision medicine approach informed by knowledge of prenatal genetic influences. Such approaches align with CHOP’s Lifespan Initiative, aimed at discovering early life interventions that can improve health in adolescence and adulthood.

Future research in this area will include longitudinal analyses over a longer time course, investigating childhood obesity and growth during puberty, a specific focus of Cousminer. She said that “because both intrauterine and postnatal growth trajectories may affect health outcomes later in life, future work should focus on a lifelong view to maximizing health.”

Finally, CHOP’s genetic data in the current study draws from trans-ethnic data from patients and families throughout its extensive pediatric network. In addition to data from individuals of European ancestry, African-American families provided considerable data, broadening insights into population health. “It is compelling to learn that genetic factors from both the mother and baby interact to influence birth weight,” said Hakonarson. “Because subsequent later-life effects on disease risk have variable impacts in different ethnicities, this may allow researchers to devise novel intervention strategies to alleviate such risks.”

Read the University of Exeter press release about this study.