Myelomeningocele (MMC) poses a diagnostic and therapeutic challenge, and can also be a component of more complex syndromes or associations. For this reason, a thorough and detailed examination of the entire fetus, with visualization of every spinal segment, is necessary.

The diagnostic accuracy of quaternary centers such as ours is virtually 100 percent in diagnosing MMC and distinguishing open spinal defects from other spinal anomalies, a fact attributable to the experience of the imaging physicians, the resolution of the equipment and the amount of time dedicated to each scan (more than two hours). In addition, ultrasound in the Center for Fetal Diagnosis and Treatment (CFDT) often aids in detecting associated conditions such as kyphosis, scoliosis, anomalous vertebrae and intraventricular hemorrhage.

Fetal magnetic resonance imaging (MRI) is a very valuable complementary modality we routinely employ at the CFDT to assess for additional central nervous system findings known to be associated with MMC including gray matter heterotopias, polymicrogyria, syringomyelia and diastematomyelia. Ultrasound in our experienced hands overestimates hindbrain herniation in 5 percent of patients who may have caudalization with displacement of the tonsils but not the complete spectrum of this disorder. MRI is relied upon to demonstrate other features including tectal beaking and elevation of the torcula. We have maintained the methodology of ultrasound for lesion level and MRI for Chiari II malformation detection in our quaternary center since the MOMS trial concluded.

MMC appears on sonography as a complex lesion containing neural elements, the actual neural placode, nerve roots, meninges and cerebrospinal fluid (CSF). For the detailed examinations we perform at the CFDT, we use more than one transducer with frequencies ranging from 5 to 12 MHz. We also use various techniques to “position” the fetus because it is optimal to examine the spine when the fetus is in the near field, as well as to evaluate the spine away from the uterine wall.

The MMC size determination is important for planning of the fetal surgical repair because a regenerative tissue matrix may be required for skin closure of very large MMC defects. The components of any sac are assessed to determine the presence of neural elements which appear as linear, echogenic areas surrounded by anechoic CSF. The wall of an MMC is assessed for thickness and complete or partial skin cover based on a symmetric or asymmetric wall appearance. 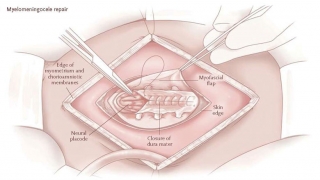 Review the fetal surgery guidelines used to determine if a patient qualifies for prenatal myelomeningocele repair.

Our protocol includes axial, sagittal and coronal images of the cerebral ventricles with both lateral ventricles and the third ventricle routinely measured on axial images. The ependymal lining of the ventricles, choroid plexus and the germinal matrix are subjectively evaluated for nodularity, increased echogenicity and any signs of intraventricular hemorrhage. The cerebellum and cisterna magna are scanned in axial and coronal planes to assess for hindbrain herniation. The lower extremities are subjectively evaluated for spontaneous motion from the hip to the toes, for any foot deformities, most often talipes and occasionally rocker bottom feet, and for foreleg muscle development with flexion and extension at all joints recorded.

Fetal MRI is routinely performed on 1.5 Tesla scanners. To date, there have been no proven harmful effects to the developing human fetus from limited exposure to the electromagnetic fields occurring during MRI, though, in the United States, fetal MRI is generally not performed in the first trimester of gestation, given the theoretical concern for teratogenesis.

A typical fetal MRI examination takes approximately 40 minutes. As fetuses with open neural tube defects have associated Chiari II malformations, the entire fetal central nervous system should be scanned. Various types of coils can be used for fetal MRI. A body coil alone or a body phased-array coil in combination with a surface coil situated on the mother’s abdomen is commonly used. Images are obtained in the coronal, sagittal and axial planes relative to the fetal brain and spine. Fast imaging techniques allow for images to be obtained in a fraction of a second. Sequential slice capability and interleaving allows for high-quality imaging despite fetal movement. Sequences with more sensitivity to focal paramagnetic susceptibility effects — such as extremely rapid gradient echo and echo planar imaging (EPI) — can be very useful in the detection of hemorrhage and mineralization, important in evaluation of the fetal brain in the setting of a Chiari II malformation. Cine imaging, while not particularly useful in primary diagnosis, does provide prognostic information complementary to the ultrasound examination in assessing lower extremity movement, due to the concern for neurogenic dysfunction secondary to the MMC.

While both MMC and myeloschisis reflect a similar underlying embryologic disturbance, accurate delineation between the two is important for fetal surgical planning. In assessing an open spinal dysraphism, it is not only important to define the defect but also to look for associated abnormalities, such as kyphoscoliosis and syrinx.

Imaging of the fetal brain is warranted in all instances of prenatal MMC diagnosis. The overwhelming majority of, but not all, cases are associated with the classic stigmata of Chiari II malformation, such as a small, crowded posterior fossa, hindbrain herniation and tectal beaking. While ultrasound is very good at delineating the major features of the malformation, MRI has been shown to provide better characterization of brain anomalies and superimposed, acquired insults. In the context of a Chiari II malformation, high-quality MRI is superior at detecting the subtle findings of subependymal gray matter heterotopia, small amounts of intraventricular blood products, callosal dysgenesis, and the presence or absence of hindbrain herniation. MRI confirmation of hindbrain herniation is a prerequisite for fetal MMC repair candidacy.

With the advent of fetal MMC repair, fetal MRI not only plays an important role in pre-surgical planning but also serves as a sensitive means of following surgical outcomes. Post-repair fetal imaging can serve as a baseline for comparison with postnatal imaging.

For more on how specific imaging modalities are used in the diagnosis, treatment and monitoring of MMC, read about the role of echocardiography in intraoperative management of fetal MMC repair.

Review the fetal surgery guidelines used to determine if a patient qualifies for prenatal myelomeningocele repair. 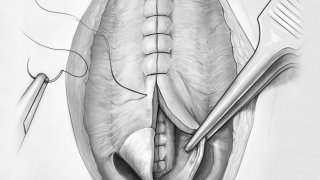 CHOP physicians present a case study for successful prenatal repair of spina bifida. Fetal surgery has been shown to be more effective than postnatal surgery. 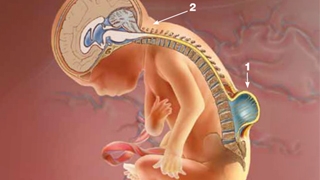