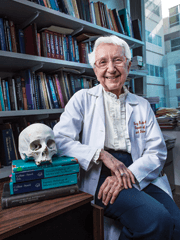 For some people, possessing samples of Albert Einstein’s brain might be a life’s high point. For Lucy B. Rorke-Adams, MD, it was one episode in a long and varied medical career.

Rorke-Adams, a leader in pediatric neuropathology, just retired after 50 years at The Children’s Hospital of Philadelphia (CHOP). CHOP offered her a fond send-off with a farewell celebration and dinner on June 19.

Rorke-Adams, 86, of Moorestown, NJ, arrived in Philadelphia from St. Paul, Minn., in 1957 to begin her medical internship at Philadelphia General Hospital (PGH), the city’s famed public hospital. Sixteen years later, she became the first female president of that hospital’s medical staff — and the only woman to hold that post in the hospital’s 188-year history. PGH closed in 1977. Having worked part-time at CHOP starting in 1965, she took on full-time duties here shortly afterward.

She went on to become acting chair of Pathology at CHOP, president of the American Association of Neuropathology, an international expert on pediatric brain tumors and shaken baby syndrome, and an invited speaker at medical schools and professional societies throughout the world. She also served as president of the medical staff at CHOP, and unexpectedly helped run the Hospital for 18 months starting in 1986 during an extended search for a chief executive officer. On top of this, she had longtime associations with the Philadelphia Medical Examiner’s Office, the Wistar Institute and Wyeth Research Laboratories. She also served as a clinical professor in the Perelman School of Medicine at the University of Pennsylvania.

All this was long before she donated samples of Einstein’s brain to the Mutter Museum in Philadelphia in 2012, an event noted by the BBC, in the New Yorker and in news stories around the world. The medical examiner who autopsied Einstein in 1955 kept five sets of brain tissue and passed them along to other pathologists until one set found its way to Rorke-Adams, then at PGH.

Rorke-Adams’ parents, like Einstein, immigrated to America from turmoil in Europe. Her mother survived the Armenian genocide in Turkey in 1915, and in 1921 made her way to Minneapolis, with tickets from her husband-to-be, also an Armenian émigré. Born Lucy Balian, and the youngest of five girls, Rorke-Adams spoke Armenian before she spoke English.

As commonly happens, contingencies caused detours in her life path. As a teenager, she wanted to be an opera singer — until her out-of-town audition with a Metropolitan Opera mezzo-soprano was cancelled when the singer took sick. She started as a clinical psychologist and worked evenings in a psychology clinic while earning her medical degree from the University of Minnesota. She considered specializing in psychiatry or surgery, but facing the prospect of more sleep deprivation, she chose pathology.

Of her long career in pathology, Rorke-Adams is proudest of her work on pediatric brain tumors. Based on her expertise, she proposed reclassifications of embryonal pediatric brain tumors in a 1981 presidential address to the American Association of Neuropathologists. This was a direct challenge to a professor in attendance, then a world authority in the field, but in her words, she “threw down the gauntlet.” Subsequent research by other scientists supported her position, and led to improved treatment and outcomes for patients.

In the 1990s, she presented another hypothesis, controversial at the time, on the origin of brain malformations arising in early human development, in so-called migration disorders. Using animal studies and gene analyses, she proposed that disordered genetic control allows neurons to migrate to abnormal, disease-causing locations.

Later studies strengthened that hypothesis. One of Rorke-Adams’ trainees, Jeffrey Golden, MD, chose to focus on migration disorders, and eventually became CHOP’s pathologist-in-chief, a position held by Rorke-Adams years before. In addition, before taking a position at Brigham and Women’s Hospital and Harvard Medical School, he became the first holder of a CHOP endowed chair in Pediatric Neuropathology named after Rorke-Adams.

Despite encountering resistance early in her career from some physicians hostile to women in their profession, and being one of a tiny minority of women in medical school and residency, Rorke-Adams says, “I never felt any kind of prejudice as a woman.” Or perhaps when it existed, she persisted anyhow.