“Evan was pure joy,” Wendy Lindberg says of her only child. “He was wise beyond his years, funny, compassionate and destined to do great things.” 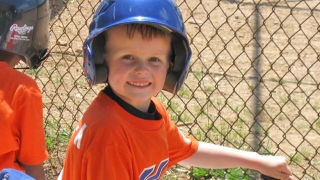 Wendy and her husband, Gavin, had a mere seven years with Evan. For four of the years, Evan fought a brave battle with an aggressive nerve tissue cancer called neuroblastoma.

When Evan was diagnosed, the cancer had already spread throughout his body. During his treatment journey, the Lindbergs came to Children’s Hospital of Philadelphia and met Yael Mossé, MD, who holds the Patricia “Pat” Brophy Endowed Chair in Neuroblastoma Research. She had discovered a mutation in a gene called ALK that causes certain neuroblastoma tumors to grow. Evan’s tumor tested positive for the mutation. In early 2010, he participated in a clinical trial using a drug that targets ALK. For Evan, the therapy was not effective. He passed away in October 2010.

“Evan taught the field that the first-generation ALK inhibitor did not cross into the brain, which is where Evan’s disease had progressed,” Mossé explains. “This has led to a laser-focused effort to find better ALK inhibitors.”

In 2011, Wendy and Gavin established the Evan’s Victory Against Neuroblastoma (EVAN) Foundation to support neuroblastoma research like Mossé’s. The foundation made its first gift to CHOP in 2012.

“We have proudly supported Yael’s work for almost a decade now,” Gavin explains, “and we are very excited about the promise that next-generation ALK inhibitors hold. Wendy and I have dedicated our lives to finding a cure — we will not stop until ‘neuroblastoma’ is a word no parent has to fear.”

The EVAN Foundation also brightens the days of children with cancer at CHOP and other hospitals through their Treats & Treasures Cart Program. Patients and family members get to choose from each cart’s wide selection of free goodies, including healthy snacks, games, stuffed animals and more. Inspired by Evan’s compassion and love of pirates, the program gives patients a welcome break from treatment and a moment of control and empowerment.

In 2015 the foundation established the Evan Lindberg Neuroblastoma Research Scholars Program at CHOP to support exceptional early-career scientists. To date, the three scholars have pursued and published impressive projects, including identifying a protein on neuroblastoma cells that is an attractive target for immunotherapeutics and working toward detecting therapy-resistant mutations at the time of a diagnosis.

Wendy and Gavin are passionate about the Scholars Program: “Ten years after his passing, Evan continues his courageous battle against neuroblastoma on behalf of children in treatment and those who will be diagnosed tomorrow. Evan would be proud of all the scholars’ dedication to helping kids like him. We know he is cheering them on.”