It is a very promising time for hemophilia care. Several new treatments for hemophilia are available (such as prolonged half-life factor products) and new ones are expected soon.

Children’s Hospital of Philadelphia has had ongoing clinical trials in hemophilia B gene therapy for nearly two decades. Most hemophilia B gene therapy trials involve using an AAV (adeno-associated virus) vector to carry the factor IX gene to the liver so patients can make their own factor IX. The challenge was that patients’ immune systems cleared the AAV. Although this did not cause any major safety concerns, it prevented patients from continuing to make factor IX. Scientists worldwide focused on overcoming this hurdle for many years with, at last, early signs of success.

Doctors at CHOP are now conducting a phase 1-2 gene therapy trial for adult males (18 years and older) with hemophilia B. The study is sponsored by Spark Therapeutics and Pfizer. The treatment is a one-time intravenous (IV) infusion of SPK-9001, an AAV vector carrying a factor IX gene. The vector travels to the liver to deliver the factor IX gene, so the liver can make factor IX. The factor IX gene used in this study is a naturally occurring factor IX variant, called factor IX-Padua, which has approximately eight times more factor IX activity than normal factor IX. The thought is that by using a stronger factor IX gene, lower doses of the AAV vector could be given. This could decrease the chance the immune system would interfere with making factor IX. 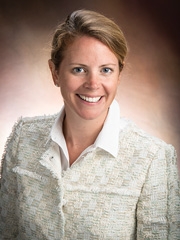 During the World Federation of Hemophilia meeting in July of this year, CHOP hematologist Lindsey George, MD, presented preliminary data on the first four patients in the trial. Information included follow-up for patients from 12 to 36 weeks after the infusion. No patients showed evidence of an immune response. After treatment, the patients’ average factor IX level was 32 percent. This is the highest level of sustained factor IX activity ever achieved in any gene therapy trial.

More importantly, all participants were able to stop their prophylaxis or on-demand factor treatments, and remain free of bleeding episodes. All patients report they are able to be more active and have a better quality of life. The graph shows the factor IX levels of the four participants over time.

The study team is cautiously optimistic about these results (George LA, et al, World Federation of Hemophilia 2016). However, it is important to remember that the study is in the early stages and more participants and longer follow-up are needed. 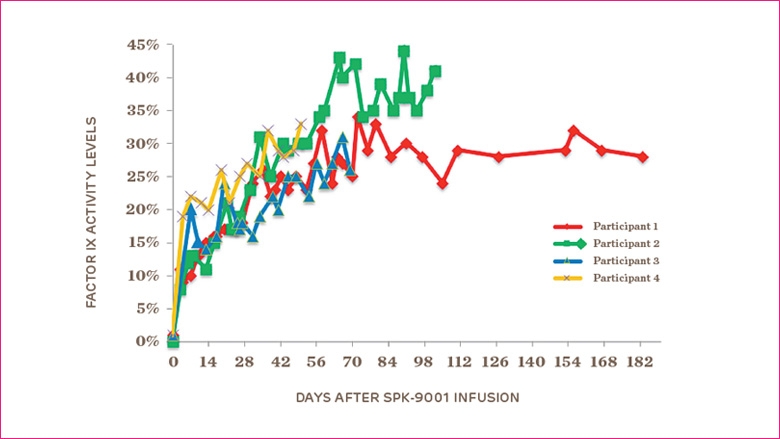 So far, most efforts in gene therapy have focused on hemophilia B because of inherent greater difficulties related to the missing protein in hemophilia A, factor VIII. More recently, many in the field of hemophilia gene therapy are focusing on applying the lessons learned from hemophilia B gene therapy to hemophilia A. There is now a single gene therapy clinical trial for hemophilia A ongoing in Europe. In the United States, the same study team at CHOP aims to open a hemophilia A gene therapy trial by the end of this year that will be based in Philadelphia. This study will also be sponsored by Spark Therapeutics and will use a study design similar to the current hemophilia B trial.

Gene therapy for hemophilia has taken a long and winding road. Although much work lies ahead, initial signs of success suggest that gene therapy is closer than ever to becoming a reality.

If you have any questions regarding gene therapy for hemophilia, you can contact the CHOP study team. Dr. George is the lead investigator (267-426-0132, georgeL@email.chop.edu), and Aline Galvão, RN, is the study nurse (267-426-5843, galvaoAM@email.chop.edu).