Families make long journeys — and even relocate — so their children can receive specialized treatment at CHOP.

Sometimes, hope can’t be found right where you’re standing — but it’s on the horizon. For certain families, hope lies in the distance, at Children’s Hospital of Philadelphia, far from where they live. Whether the journey is hundreds or thousands of miles, it doesn’t matter, when a child needs a rare or specialized treatment provided only at CHOP.

Patients from all 50 states and more than 115 countries have sought out CHOP’s experts when their local pediatric care options weren’t enough. Their families might stay in Philadelphia for weeks or months. For some, the need to be near CHOP means packing up everything they own and setting up a new home. This might present enormous logistical or financial challenges — which CHOP has resources to help with — but they are challenges worth overcoming when a child’s long-term health is at stake.

So many families turn to CHOP for care — this is why a second inpatient hospital is so urgently needed (see page 7). Discover the extraordinary stories of four families who upended their lives so their children could receive the world’s best care from the world’s best clinicians. 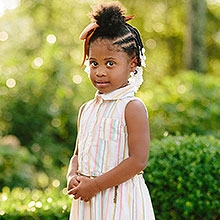 2½ -year-old Emoni’s parents traveled from Georgia to be cared for at CHOP’s Center for Fetal Diagnosis and Treatment. Emoni’s journey to CHOP began before birth, when a 20-week fetal ultrasound in Macon, Ga., revealed a growth on the lower part of her spine. A specialist thought the problem was sacrococcygeal teratoma (SCT), a tumor that grows from a developing baby’s tailbone. In most cases, the tumor can be removed safely at birth with surgery. The specialist explained all this to Emoni’s parents, Chiquita and Adonis Clayton, and referred the couple to CHOP’s Center for Fetal Diagnosis and Treatment for an expert evaluation.

The parents were overwhelmed, but phone calls with a CHOP social worker and clinical coordinator made everything seem manageable. Once Chiquita and Adonis were in Philadelphia, CHOP specialists told them the surgery would most likely be a straightforward procedure.

“It was so reassuring,” says Chiquita. “Where the appointments in Georgia had been scary and frantic, here, they were calm.”

The couple needed to return to CHOP and stay for several weeks, through their daughter’s birth, surgery and recovery. One resource that helped them make the trip was the Addison’s Hope for Fetal Families Fund, established by the Kelly family, whose daughter Addison had lifesaving fetal surgery at the hospital. The fund helps pay for things insurance will not, such as travel costs and lodging. Thanks to a recent gift from Richard Wood Jr., this fund will have the resources to support even more families.

Emoni was born in December 2016 in the Garbose Family Special Delivery Unit, the world’s first birthing unit within a pediatric hospital designed specifically for healthy mothers carrying babies with serious birth defects. The next day, surgeons successfully removed the tumor.

Today, Emoni is an extremely happy 2½-yearold who is full of energy. “We were referred to CHOP for a reason,” says Adonis. “I had faith everything would be OK, and with their help, it was just that.” 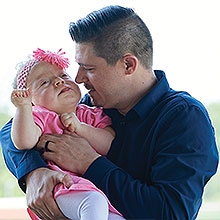 Violet, 2, with her father, Bobby. The family relocated to the Philadelphia area because of CHOP’s expertise in Violet’s rare genetic syndrome. The Valenzianos would go to the ends of the earth to get their daughter Violet the care she needs.

They didn’t need to go that far, but they did move from the Chicago area to Philadelphia so Violet, who has Pallister-Killian syndrome (PKS), could be treated by multiple pediatric specialists at CHOP.

Violet spent the better part of her first year in three different Illinois hospitals. “It seemed like they found something else wrong every day,” says her mother, Amber. Violet’s palate was arched, her gut anatomy was abnormal and her diaphragm had a hole, among other issues. Finally, a genetic test identified PKS.

“They gave us a website and a couple of articles on the condition,” says Amber. “That was it. She was the first patient with PKS the hospital had ever seen.”

Through a web search, Amber and her husband, Bobby, discovered the research that CHOP physician-scientists were doing on PKS. A visit in April 2018 changed their lives. “We went from a very negative outlook on Violet’s quality of life to learning that, while she’ll never be fully capable, she can live a long, happy life,” explains Bobby. Amber adds, “They knew so much about PKS and were treating several other PKS patients, so we knew right away that this is where we wanted to be.”

Everything related to their relocation fell into place, and in a few months the family — including big sister Azalea, now 4 — was in their Delaware County, Pa., home. Violet’s personality has bloomed. “She’s working on rolling over,” says Amber. “She’s our wiggle worm!”

Nick urgently needed a new option: His leukemia had returned, and the disease was no longer responding to chemotherapy. It was 2016, and Nick’s parents, Nicole and Mike Gerdin, were desperately searching for possibilities beyond their home state of Iowa. That’s when they heard about the incredible work happening at CHOP’s Cancer Immunotherapy Program.

When Nick’s family contacted the program, the team was conducting experimental studies on a cell therapy for treatment-resistant forms of acute lymphoblastic leukemia (ALL), the most common childhood cancer and the kind Nick was fighting. Nick received the last slot in a trial before it closed so that the results could be sent to the U.S. Food and Drug Administration (FDA) to review.

Nick’s T cells, a type of white blood cell, were collected and reprogrammed to kill his cancerous cells. Today, 12-year-old Nick remains cancer free. Because of the amazing success of the trials led by CHOP, in August 2017 the FDA approved the use of this immunotherapy, and it’s now available to children worldwide.

Full of gratitude, the Gerdins were determined to help other children like Nick, “who wouldn’t have any other option,” says Nicole. The family chose to give a generous gift through the Gerdin Charitable Foundation to fund two pilot clinical trials, one for ultra-high-risk patients with ALL, and the other targeting a different cancer called acute myeloid leukemia. The family’s gift will accelerate advances that will become the breakthroughs of tomorrow.

When Abdulrahman Abanemi first arrived in Philadelphia from Saudi Arabia, he was 5 years old and weighed less than 25 pounds.

Abdulrahman has Holt-Oram syndrome, an extremely rare genetic disorder that causes heart and limb abnormalities. When he experienced complications after having heart surgery in Saudi Arabia, his parents worked with their embassy and with CHOP’s Global Patient Services (GPS) team to bring Abdulrahman to CHOP.

Because Abdulrahman has very complex medical needs, clinicians from multiple departments cared for his heart, lungs, airway, digestive tract and more. Under the close care of CHOP’s experts, his health improved.

Abdulrahman was at CHOP for three years, inpatient and outpatient. It was a stressful and difficult time for him and his parents, but an extraordinary group of people at CHOP supported them. His GPS team oversaw his care, coordinated his many medical appointments, arranged his home care, and helped the family navigate life in Philadelphia. When he was ready to return to Saudi Arabia, the team assisted with his discharge and transportation home.

And while Abdulrahman still has many challenges ahead, the Abanemis know the CHOP team will continue to be available to them for many years to come. “I can see daily improvements in Abdulrahman,” his father, Abdullah, says. “I really appreciate the work they’ve done in this hospital. I cannot ask for more.”