Perhaps it would spare children.

If there was any small bright spot in the COVID-19 pandemic, it was that the virus appeared less harmful to the very young. Children got sick at much lower rates than adults, and when they did, their symptoms were often less severe.

Then in April, healthcare professionals began noticing a small but disturbing trend. In Europe and the United States, a handful of children were seeking care for a constellation of symptoms including prolonged fever, GI inflammation and, more troubling, heart failure and systemic shock.

‘A punch in the gut’

Testing revealed that most of these children had indeed been infected with COVID-19, but had not become sick right away. Instead, they developed a different type of illness: Weeks or months later, their immune systems mounted an overblown reaction as potentially dangerous as COVID-19 itself.

“It happened so fast, it was like a punch in the gut,” says Edward Behrens, MD, Chief of the Division of Rheumatology at Children’s Hospital of Philadelphia and Director of the hospital’s Immune Dysregulation Program.

The right team at the right time 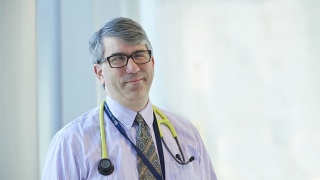 Edward Behrens, MD, Chief of the Division of Rheumatology Fortunately, Behrens and his team were prepared to spar. In 2018, CHOP established the Immune Dysregulation Program to focus multidisciplinary expertise on the rare, complex and difficult-todiagnose spectrum of disorders that affect the immune system. So groundbreaking was their work, Immune Dysregulation was awarded Frontier status, joining an elite group of CHOP programs that are pioneering new advances in children’s health at an astonishing pace.

By May, the new illness had a name — Multi-System Inflammatory Syndrome in Children (MIS-C) — and a group of brilliant CHOP researchers determined to understand it. Studying data from cases worldwide and CHOP patients, the Immune Dysregulation team set to work unraveling the mystery of what happens inside the body when MIS-C attacks. Behrens recounts: “We said, ‘We’ve got the tools, brains and resources — we have to do something.’”

In June, less than two months after the syndrome first appeared, Behrens and team had established the first clinical proof that MIS-C is a post-infection immune system response to COVID-19. They are teasing out puzzling aspects of the syndrome — such as microangiopathy, a dangerous inflammation of small blood vessels that occurs in both MIS-C and full-blown COVID-19. “We are probably the only hospital in the world that could do this,” says Behrens.

The team has submitted their initial findings to prestigious medical journals for rapid review. And they’re just getting started.

‘Will my child get sick?’

The looming question remains why some patients have a severe response to COVID-19 while others develop MIS-C later and yet others don’t get sick at all. Understanding the biology of both COVID-19 illness and MIS-C will enable scientists to develop much more specific diagnostic tests and help clinicians identify children who are at risk. Improved treatments will follow. All of this will help provide answers for worried parents.

Behrens believes the answers are there — hidden within the body’s immune system — and CHOP researchers are already finding them. “There will be a continuous stream of learning coming out,” he says. “Stay tuned.” The world most certainly will.