A 19-year-old female presents with a 1-month history of a left neck lump. It is painless, non-erythematous, and there is no history of trauma. She has not had fever, night sweats, weight loss, shortness of breath, orthopnea, or exercise intolerance. Her only other complaint is generalized pruritis.

On examination, she is afebrile with normal vital signs. She appears well. A firm, non-tender mass is palpable in the left cervical area. There is no detectable lymphadenopathy or hepatosplenomegaly.

Chest X-ray (CXR) shows a mediastinal mass occupying less than one-third of the intrathoracic diameter. Computed tomography (CT) scan demonstrates a 5 x 5 x 3 cm left neck mass with mediastinal lymphadenopathy. There is no lymphadenopathy below the diaphragm, and no involvement of her bones, liver, spleen, or lungs. Blood work is unremarkable except a mild normochromic anemia and a sedimentation rate of 75. Biopsy of her neck mass demonstrated classical Hodgkin lymphoma.

Hodgkin lymphoma (HL) was first described by the British physician Dr. Thomas Hodgkin in 1832. The age of peak disease incidence in industrialized countries is bimodal, firstly in the mid-20s and secondly after 50 years of age. HL accounts for approximately 6% of childhood cancers. Those with immune dysregulation, primary immunodeficiencies, HIV infection, autoimmunity, or chronic immunosuppression are at risk of developing HL.

HL originates commonly from the lymphoid tissues of the mediastinum and neck areas, typically presenting with progressive painless cervical adenopathy. Anterior mediastinal masses are frequent and can cause superior vena cava syndrome or airway compromise with cough, orthopnea, and respiratory distress. Therefore, a CXR and airway assessment must always be done prior to any sedated procedures or prolonged imaging studies. 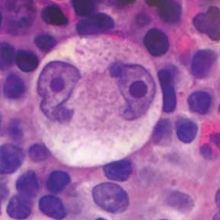 Figure 4: Reed-Sternberg cell of Hodgkin Lymphoma, showing the characteristic “owl eye” appearance. Diagnosis of HL is made by lymph node biopsy. Unlike most types of lymphoma in which cancerous cells feature prominently, the malignant cells in HL, known as Reed-Sternberg cells, are scattered sparsely through a bed of non-neoplastic inflammatory cells (see Figure 4). For this reason, fine needle aspirates are often non-diagnostic in HL, and excisional lymph node biopsy is recommended.

Imaging evaluation includes CXR, CT of the neck, chest, abdomen, and pelvis, and functional imaging such as a positron emission tomography (PET) scan. Bone marrow biopsies are done in the presence of ‘B’ symptoms, if disease is bulky, or has spread to both sides of the diaphragm. The most common sites of metastatic disease include liver, lung, bone, and bone marrow. The Ann Arbor Staging System is used (see Table 1), which is based on the number and location of disease sites. Risk groups are then assigned according to disease stage and presence of bulky disease.

Treatment is comprised of multi-agent chemotherapy and radiation. Currently, there is no single regimen that is used universally for treatment of HL, but typical combinations include 4 to 6 agents such as doxorubicin, bleomycin, vincristine, dacarbazine, procarbazine, etoposide, prednisone, or cyclophosphamide.

Radiotherapy is an effective treatment modality in HL. However, in consideration of serious long-term sequelae, clinical trials are underway to determine if radiation can be eliminated in selected patients, and in others, what are the most effective fields, dose, and modality.

Surgical resection of HL is not indicated, except in very rare cases of limited disease. It is generally considered to be a curable disease for most, with an overall survival rate above 90%.

Once treatment is complete, patients are followed by clinical examinations and intermittent surveillance imaging.

With the majority of HL patients surviving their disease, the focus has turned to minimizing the long-term effects of treatment while maintaining excellent cure rates. Cardiac dysfunction is a significant concern due to both anthracycline exposure and mediastinal irradiation of thoracic disease. Pulmonary toxicity is also a concern if bleomycin is used, especially in combination with radiation. Chest radiation significantly increases the risk of breast cancer. Our center is fortunate to have proton therapy, which is one of the most precise forms of radiation. It is now our standard to refer patients with mediastinal disease for proton therapy as this modality has less scatter of radiation to normal surrounding structures.

HL survivors are at risk for other secondary malignancies including thyroid, skin, and head and neck carcinomas, and secondary sarcomas. Treatment-related leukemia is rare, but can occur after certain types of chemotherapy.

More common is infertility and premature ovarian failure due to cyclophosphamide and procarbazine, with these risks being sex-dependent. Sperm and gonadal preservation are increasingly offered to post-pubertal patients prior to commencement of therapy. Recommended surveillance guidelines for patients in long-term follow-up are available at www.survivorshipguidelines.org. Patients can also be followed by the Cancer Survivorship Program at CHOP.

This patient had non-bulky disease localized to the neck and chest without ‘B’ symptoms so was staged as IIA. Her treatment included both chemotherapy and radiation, and she had an excellent response. She is now 3 years post therapy and comes to the oncology clinic every 4 to 6 months for CXR, basic labs, and intermittent cardiac and pulmonary function screening. She is doing well and applying to medical school this year.

This is a summary of stages and definitions:

Using the case of a 14-year-old, we discuss the diagnosis and treatment of osteosarcoma.

CHOP has treated more than 200 patients with CAR T-cell therapy, making us one of if not the busiest cell therapy center in the world.