Children with mitochondrial diseases who suffered acute metabolic strokes benefited from rapid intravenous treatment with the amino acid arginine, experiencing no side effects from the treatment. The diseases were caused by a range of different genetic disorders. In half of the stroke episodes, patients showed clinical improvements in symptoms such as seizures and partial paralysis.

Mitochondrial disease results from malfunctions in mitochondria, the energy-generating “batteries” dwelling within our cells. Caused by mutations in roughly 300 different genes, there are a broad variety of mitochondrial disorders, most of which currently have no effective treatment. 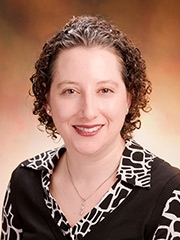 Marni J. Falk, MD “In half of our patients we saw at least partial reversal of their metabolic stroke symptoms,” said study leader Marni J. Falk, MD, Executive Director of Mitochondrial Medicine, a frontier program at Children’s Hospital of Philadelphia. “This is a single-center retrospective study of clinical practice outcomes, but one with promising results. While we need more research, conducted prospectively in larger groups of patients, this analysis expands the evidence base of potentially promising treatments for a wide range of otherwise very severe and progressive mitochondrial diseases.” Falk’s co-author was Rebecca D. Ganetzky, MD, a clinical geneticist and attending physician who specializes in metabolic diseases.

The current study reported on nine unrelated patients treated at CHOP between 2009 and 2016 once or more for acute stroke-like events in which they developed new neurological problems. The team evaluated outcomes from a total of 17 different stroke-like episodes. Patients ranged in age from under 19 months to 23 years, with a median age of 8 years at the time of their metabolic stroke. All had non-MELAS mitochondrial disorders, resulting from diverse genetic causes.

Like many patients with mitochondrial disease, nearly all patients in this cohort were already taking oral “mitochondrial cocktails” of vitamins and cofactor supplements, commonly including oral arginine, at the time of their stroke-like episode. Despite their frequent use, nearly all such nutritional supplements are unstandardized and untested. Ganetzky pointed out that intravenous arginine is much more potent than oral arginine, adding “This study was an opportunity to more systematically analyze a therapy that is clinically used on an empiric basis in the course of acute clinical care.” Arginine is not used to treat classic, non-metabolic vascular strokes.

In eight (47 percent) of the 17 stroke-like episodes, positive clinical responses occurred, including stopped seizures, normalized strength, and resolved atonia (low muscle tone). Greater improvements occurred in children with acute hemiplegic stroke (weakness or paralysis on one side of the body). Magnetic resonance imaging (MRI) performed in some patients showed that brain changes caused by the stroke returned to normal after patients received IV arginine. Two patients who did not respond to IV arginine treatment for stroke-like episodes that developed during acute infections died of progressive, multi-system problems. No adverse effects were seen from the IV arginine treatment.

Overall, the best results from IV arginine occurred when patients received treatment immediately upon clinical recognition of a new neurologic problem that was concerning for an acute metabolic stroke. Previous research has suggested that arginine acts by improving the flow of nitric oxide, which relaxes blood vessels to improve circulation.

“Given these observed clinical benefits with low overall risks, our retrospective study data support the current use of IV arginine at the onset of acute metabolic strokes in children with many forms of mitochondrial disease,” said Falk, who added that prospective, larger studies should be performed. “As we move forward in mitochondrial medicine, we strongly encourage the objective evaluation of all current practices and potential therapies as rigorously as possible, both in preclinical models and in robust clinical trials.”

Funding for this study came from the National Institutes of Health (grant GM008638) and the David and Patricia Holveck Research Fund.