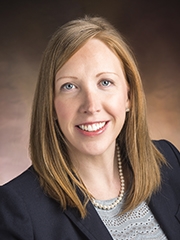 “I’m honored by this appointment and excited to lead as Medical Director,” said Dr. Josephson. “My vision for the Lung Transplant Program includes enhanced access to transplant for all children with end-stage lung disease, timely referral process and evaluations, improved and lengthened long-term survival post-transplant, and improved organ utilization nationwide.”

She received her doctor of osteopathic medicine degree from the University of Medicine and Dentistry of New Jersey, School of Osteopathic Medicine, in Stratford, N.J. She did her Pediatrics Residency at Cohen Children’s Medical Center (formerly Schneider Children's Hospital at North Shore Long Island Jewish), New Hyde Park, N.Y., and was a Fellow of Pediatric Pulmonary Medicine at CHOP, where she was the recipient of the Jacqueline E. Swartz Endowed Fellowship in Pediatric Pulmonology.

Josephson has been a co-author of studies that appeared in PloS One, American Journal of Physiology and Pediatric Pulmonology. She is a member of the International Society of Heart and Lung Transplantation, the American Thoracic Society, the American College of Chest Physicians, the American Academy of Pediatrics, and the American Osteopathic Association. She has four children, and her personal interests include yoga, meditation, running, cycling, and playing the guitar.