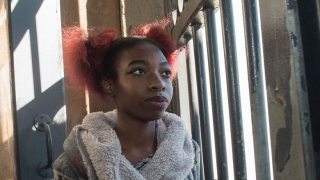 Dee Dee was 14 years old when she was stabbed outside her home in Philadelphia, an unintended victim of a street fight. She was rushed to the Emergency Department at Children’s Hospital of Philadelphia covered in blood and with a bad gash in her head. After a team of physicians tended to her physical wounds, social workers with CHOP’s Violence Intervention Program (VIP) began a much longer process: tending to her emotional and mental wounds. In the days, weeks and months after the incident, those ranged from anger and depression to post-traumatic stress symptoms so intense that she feared going outside her house.

After months in a VIP trauma-focused peer therapy group, Dee Dee found healing. She now serves as a peer mentor for other youth who experience traumatic events and is a student at the Art Institute of Philadelphia with dreams of becoming a fashion designer.

Almost half the children in our country experience at least one or more types of serious childhood trauma, according to the National Survey of Children’s Health. This includes child maltreatment such as physical, sexual and verbal abuse, and physical and emotional neglect. A recent grant from Kohl’s Cares, made possible by Kohl’s, seeks to address the mental and emotional impact these devastating experiences have on youth. The two-year, $670,000 grant will be divided among three CHOP programs: VIP, Friend to Friend and Safe Place: The Center for Child Protection and Health.

Safe Place provides care to children and families dealing with child abuse or neglect. The grant will expand and enhance the center’s ability to screen foster care youth at risk for mental health conditions, substance abuse and suicide. Child sexual abuse can result in a 60 percent rate of post-traumatic stress disorder, significantly higher than what is reported in our soldiers serving this country, says Safe Place Director Philip Scribano, DO, MSCE.

Before being connected with Safe Place, 5-year-old Damien lived nothing short of a nightmare. He had been in and out of foster care since he was 1 month old and suffered sexual abuse and other egregious adversities, which left him extremely traumatized and developmentally delayed. His life was on a tragic trajectory, but screening and treatment interventions by the Safe Place team put him on a new course and helped restore his childhood.

“We evaluate kids who are hurting. They’ve been through tremendous adversity, and we want to be sure we get it right in supporting them,” says Scribano. “Comprehensive screening and intervention is the first step.”

For years, Kohl’s has supported the Hospital’s mission to improve children’s health and well-being, giving more than $8.6 million to CHOP since 2001. Over the past 10 years, Kohl’s Cares grants have primarily gone toward CHOP’s Safety Center, which provides injury prevention education and child safety devices such as car seats and bike helmets.

This year, Kohl’s focused its funding on CHOP’s latest Community Health Needs Assessment, which identified the need to increase access to mental and behavioral health services for children and adolescents to minimize the impact of violence and maltreatment.

Friend to Friend (F2F) works within schools to address relational aggression, which includes things like starting rumors and social exclusion. This form of aggression tends to affect girls more than boys and might sound benign, but it can build up over time and lead to confrontations.

F2F teaches students and teachers strategies to deal with challenging peer relationships and avoid potentially aggressive conflicts. The program, led by Stephen Leff, PhD, Co-Director of CHOP’s Violence Prevention Initiative, has been tested in a number of public schools in Philadelphia and shown to have a positive long-term impact, garnering interest from schools across the country. The Kohl’s grant will help CHOP develop ways for school staff to run the program with coaching and consultation from Leff’s team, thus expanding its impact exponentially.

“The communities and homes in which many of our children live and the schools in which they are educated are often nests of stress and violence,” says Joel Fein, MD, MPH, Co-Director of CHOP’s Violence Prevention Initiative. “Our aim is to provide a path for these youth to heal and move forward and become positive contributors to their neighborhoods.”