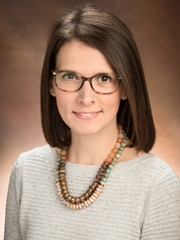 Katherine L. Helbig A large international research team has discovered a new genetic cause for a severe, difficult-to-treat childhood epilepsy syndrome. Spontaneous mutations in one gene disrupt the flow of calcium in brain cells, resulting in epileptic overactivity. The team’s research in patients also found clues to potential medical treatments for the rare condition.

“Even though variants in this gene were only just discovered to cause disease, we already have a good understanding of how changes in the gene’s associated protein affect brain function — causing neural overactivity in epilepsy,” said first author Katherine L. Helbig, MS, CGC, a research genetic counselor in the Neurogenetics Program in the Division of Neurology at Children’s Hospital of Philadelphia (CHOP). “Furthermore, although much follow-up research remains to be done, we found that there is a possibility that specific anti-seizure medications could reduce this overactivity in some patients.”

The senior authors of this large international study, published online in the American Journal of Human Genetics, were Heather C. Mefford, MD, PhD, of the University of Washington, and Holger Lerche, MD, of the University of Tuebingen, Germany. The full research team included nearly 100 scientists, from Europe, Canada, China, Australia, New Zealand and the United States.

The research team focused on disease-causing changes in the CACNAIE gene, long suspected to play a key role in how neurons regulate their electrical activity, but not previously known to cause human disease. This study was the first to link the gene to human epilepsy. By doing next-generation sequencing in 30 infants and young children with severe epilepsy, the team pinpointed disease-causing variants in CACNA1E. In most cases, the gene variants were de novo — present in the affected children, but not found in their parents. De novo variants are being increasingly found in severe childhood epilepsies.

“The fact that we were able to identify 30 patients at this stage of research indicates that we could be looking at a more common cause of genetic epilepsy than we would have initially assumed,” said Helbig. She added, “This research enables us to give some families an answer as to why their child has severe epilepsy. It also offers the potential that we can build on this knowledge to find new strategies for treatment.”

In addition to having difficult-to-treat epilepsy, most of the affected children had severe developmental delays, low muscle tone, contractures starting at birth and movement disorder. Contractures are permanently bent joints that limit movement. “Many of the children were initially thought to have a severe muscular condition because of their contractures,” said Helbig. “We were surprised to find that a genetic epilepsy had such severe symptoms.” Helbig is a specialist genetic counselor in CHOP Neurology, which has deep experience in investigating and treating genetic epilepsies.

The de novo mutations disrupt a calcium channel in brain cells, causing the channel to activate too easily or to inactivate too slowly, and giving rise to epilepsy. In some cases, the study team found the increase in calcium current was too high to measure.

Most of the 30 patients did not respond to any anti-epileptic medications, except for a few that responded to the medication topiramate, known to target the CACNA1E channel. Further systematic work, said Helbig, will investigate this finding and other aspects of their research, with the aim of translating their knowledge into targeted precision therapies for children with severe genetic epilepsy.

Funding support for this study came from multiple sources worldwide, including national medical institutes of various countries, the U.S. National Institutes of Health (grant NS069605), and the Deciphering Developmental Disorders study, sponsored by the Wellcome Trust.

For more information on this gene discovery research, see Helbig’s comments on the blog “Beyond the Ion Channel,” operated by the International League Against Epilepsy, including her husband and study co-author Ingo Helbig, MD, a neurologist at CHOP.