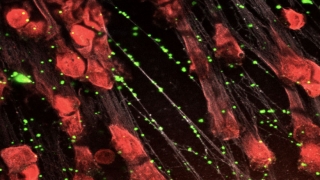 An image showing NETs (in red) coated with modified KKO (white), capturing staph aureus (in green) Researchers at Children’s Hospital of Philadelphia (CHOP) have developed a novel treatment for sepsis – one of the leading causes of hospital death – that enhances the body’s bacteria-capturing neutrophil extracellular traps (NETs) so that they more effectively capture infectious bacteria, resist degradation, and improve sepsis outcomes and survival.

The approach is described in the March 2020 issue of Blood and was also presented as an abstract at the 61st American Society of Hematology annual meeting, where it was one of the highest scoring abstracts considered from a group of more than 4,500 submissions.

“These results indicate that our NET-stabilizing interventions enhance that ability of NETs to capture bacteria while preventing them from releasing antibacterial compounds that can cause organ damage, dramatically improving bacterial clearance as well as survival in a mouse model of sepsis,” said Kandace Gollomp, MD, a physician researcher in CHOP’s Division of Hematology and first author of the paper. “Given that the treatment was most effective when combined with antibiotics, it’s possible that these two treatments may act synergistically to lead to better outcomes.”

Sepsis is a deadly complication of infection that occurs when the immune system response to an infectious agent becomes dysregulated, leading to life-threatening damage to the lungs, kidneys and other vital organs. It is a leading cause of hospital death and contributes significantly to high health care costs. Treatment currently consists of antibiotics and supportive care, but neither targets the host response that makes sepsis so deadly, and the poor survival rate has not changed significantly in several decades.

In an effort to seek new treatments that would improve survival, CHOP researchers developed a treatment that targets NETs, extracellular webs of DNA that are released during infection as part of the body’s inflammatory response. These NETs ensnare infectious pathogens, but they also cause collateral damage by injuring nearby organ tissue. By the time patients are diagnosed with sepsis, they often already have high NET levels, so treatments that inhibit NET release would be too little, too late. Similarly, treatments that destroy NETs may be ineffective because they liberate captured bacteria and release toxic NET degradation products, exacerbating the septic response.

Instead, CHOP researchers developed an intervention that compacts and stabilizes NETs and sequesters NET degradation products. To do so, they developed a modified version of KKO, an antibody that typically induces blood clots, and changed the portion of the antibody that interacts with cell receptors so that it wouldn’t activate an immune response and lead to blood clots. This antibody binds to complexes of NETs and platelet factor 4 (PF4), a protein released by activated platelets, which causes the NETs to resist degradation and improves their ability to capture bacteria.

Testing the treatment on mice with sepsis, the research team found that the modified antibody reduced the severity of illness, decreased the levels of bacteria circulating in the blood and improved survival.

“This approach represents a novel way of approaching NETs in sepsis,” Gollomp said. “Not only could this transform the way we treat sepsis in the future, but the findings could have implications for the treatment of other immune conditions in which NETs are involved.”