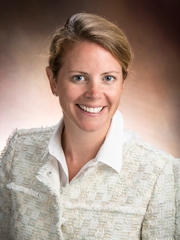 “A one-time therapy sufficient to prevent bleeding without further medical intervention is the ideal treatment goal for patients with hemophilia,” said lead investigator Lindsey A. George, MD, a hematologist at Children’s Hospital of Philadelphia (CHOP). “This cohort of 10 patients all safely experienced sustained clinical benefit after one infusion.”

George and colleagues published their findings in the Dec. 7 issue of the New England Journal of Medicine. The team previously reported preliminary results from the trial in December 2016 at the plenary session of the American Society of Hematology annual meeting. George is a member of CHOP’s Division of Hematology as well as the Raymond G. Perelman Center for Cellular and Molecular Therapeutics. That center is part of CHOP’s Roberts Collaborative for Genetics and Individualized Medicine.

The phase 1/2 clinical trial, involving 10 adult male participants, was sponsored by Spark Therapeutics of Philadelphia. The study’s senior author is gene therapy pioneer Katherine High, MD, president and head of Research and Development at Spark Therapeutics. Starting in the 1990s, High performed preclinical work and early clinical trials in hemophilia while at CHOP.

“People who live with hemophilia face a lifelong need for vigilant monitoring and recurrent factor concentrate infusions to prevent spontaneous, potentially life-threatening bleeds and to protect their joints,” said High. “The discipline required to execute the usual prophylactic regimen can exact a heavy toll on quality of life that most people take for granted, and those regimens result in significant costs to patients, families and the health care system.”

The current trial’s study team used a naturally occurring clotting factor that is hyperfunctional — eight to 10 times stronger than normal factor. Called Factor IX-Padua (FIX-Padua), it was discovered in an Italian family in 2009 by a scientific team that included study co-author Valder R. Arruda, MD, PhD, at CHOP.

In the current study, the researchers used an adeno-associated viral vector to deliver their bioengineered payload of the gene that codes for FIX-Padua. Patients on the trial safely expressed that protein.

Hemophilia patients have an inherited gene mutation that impairs their ability to produce normal levels of a blood clotting factor, resulting in disabling or life-threatening bleeding, arising spontaneously or caused by trauma.

Hemophilia B, in which patients have low levels of clotting factor IX (FIX), has been used as a model disorder for the development of gene therapy research for more than two decades. The strategy of hemophilia gene therapy is to deliver a corrective gene into the patient with the goal of expressing therapeutic levels of blood clotting factor. Preclinical experiments in animal models of hemophilia successfully treated the disease, but human trials were frustrated by an immune response that defeated initial clinical benefits by inhibiting sustained expression of FIX.

Because higher doses of vector had previously stimulated this limiting immune response, the current researchers aimed for the lowest dose necessary to achieve clinical benefits — taking advantage of FIX-Padua’s attributes.

Study patients maintained factor levels of approximately 33 percent, enough to move them out of the severe disease category and nearly eliminate all bleeding events. They were able to avoid the painful, disabling joint bleeds that previously occurred when their clotting levels dropped during typical fluctuations that occur with traditional treatment, consisting of regular doses of clotting factor. The researchers found the clinical benefits continued for up to 78 weeks of follow-up.

None of the 10 patients had serious adverse events from the gene therapy. Eight of the 10 did not require external doses of factor, and nine of the 10 did not experience bleeds after the vector infusion. The only participant who had to administer factor already had significant baseline joint damage, but overall used 91 percent less factor than before the treatment.

“We look forward to continuing the development of this therapy in a Phase 3 trial,” said George. “I am optimistic this study is just the beginning of a true paradigm shift in the treatment of hemophilia.”