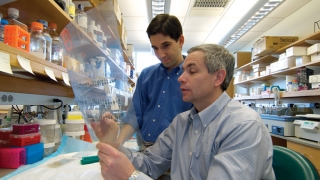 Researchers studying the pediatric cancer neuroblastoma have detailed how cancer-driving mutations evolve during chemotherapy, and they hope to exploit this knowledge to design better treatments for children.

“Our greater understanding of mutations on a crucial biological pathway offers prospects of acting on these pathways for direct benefit to children with this aggressive form of neuroblastoma,” said senior author John M. Maris, MD, a pediatric oncologist at The Children’s Hospital of Philadelphia.

The study, which includes collaborators from other U.S. centers and six foreign institutions, appears online today in Nature Genetics. Co-study leaders were Derek Oldridge, from Maris’ laboratory; Thomas F. Eleveld, MSci, and Jan J. Molenaar, PhD, of the Academic Medical Center of the University of Amsterdam; and Virginie Bernard, PhD, and Gudrun Schleiermacher, MD, PhD, of the Institut Curie in Paris.

Neuroblastoma and its challenges

A solid tumor of the peripheral nervous system, often appearing in the abdomen or chest, neuroblastoma is the most common cancer in infants. It accounts for a disproportionate share of cancer deaths in children, with cure rates lagging behind those for other pediatric cancers.

Most children with neuroblastoma initially respond to chemotherapy, but a large proportion suffer a lethal relapse. The study team therefore investigated the genetic and molecular characteristics of relapsed tumors, comparing those genomes to those of the initial tumors previously removed from the same patients.

When they performed sequencing of the entire 3 billion DNA bases in 23 pairs of tumors obtained at diagnosis and relapse, the study team found that relapsed tumors generally contained significantly more mutations and structural abnormalities than the primary tumors. “Our results imply that a clonal selection process occurred—meaning that more aggressive, cancer-driving mutations acquired a selective advantage after chemotherapy, leading to relapse,” said Oldridge.

Among the 23 relapsed tumors, 18 harbored mutations that boosted signals funneling into a biological pathway, the RAS-MAPK pathway, which made neuroblastoma progress. Fortunately, many mutations activating this pathway are sensitive to a group of existing drugs called MEK inhibitors. In cell cultures and animal studies, the researchers found that MEK inhibitors slowed tumor growth and improved the animals’ survival.

“Our preclinical findings strongly suggest that MEK inhibitors may directly benefit relapsed patients who have mutations on the RAS-MAPK pathway,” said Maris. “Patients who relapse would need to have their tumors biopsied and sequenced to determine if they qualify for this type of personalized therapy. These data hold the potential to provide the documentation necessary to recommend tumor biopsies at the time of disease relapse, in order to determine evidence-based next steps.”

Funds from the National Cancer Institute, the National Institutes of Health (grants CA98543 and CA98413 to the Children’s Oncology Group) and the University of Pennsylvania Genome Frontiers Institute supported this study. In addition to his CHOP position, Maris also is a professor of Pediatrics in the Perelman School of Medicine at the University of Pennsylvania. Oldridge is in Penn’s MD-PhD medical scientist training program.