A 3-year-old girl presents with difficulty sleeping, increased crying, and abdominal pain. She is the product of a normal full-term delivery and has no significant past medical history. Her parents note that she was healthy until approximately a month ago, when she began waking at night complaining of pain. They also note that she has been increasingly irritable and less willing to walk over the past 2 to 3 weeks. They deny fever, vomiting, diarrhea, and constipation. She has not lost any weight that they have noticed, although her appetite has been dwindling.

On examination, the patient is in no acute distress, although appears somewhat quiet and clingy. An abdominal mass is palpable in the region above the umbilicus. Her lungs are clear, and the remainder of her exam is within normal limits. CT scan of the chest, abdomen, and pelvis shows a large mass in the central abdomen, extending cranially to the mid-thorax along the right paraspinous region. Bone marrow biopsy demonstrates small round blue cells. Urine catecholamines are somewhat elevated.

Discussion: The diagnosis is neuroblastoma, a malignancy that arises from embryonic neural crest cells of the peripheral nervous system and is the most common extra-cranial solid tumor of childhood. The presentation and stage at diagnosis, as well as the associated prognosis, may be very heterogeneous. Several diagnostic elements factor into risk stratification, including patient age, disease stage, tumor cell ploidy, histopathology, MYCN gene copy number, and other genetic aspects of the tumor. Select patients who are very young (less than 1 year of age) may have disease designated stage 4S that is expected to spontaneously regress and have an excellent prognosis. Patients with low or intermediate-risk (stage 1 or 2) disease have an excellent prognosis after treatment with surgical resection with or without chemotherapy.

Unfortunately, however, about half of patients have high-risk disease (stage 3 or 4, depending on other diagnostic factors) at diagnosis. Although the prognosis for such children is guarded, with aggressive treatment, long-term survival rates approach 50%. The current treatment paradigm for children with high-risk neuroblastoma is intensive multi-agent induction chemotherapy followed by surgical resection of the primary tumor, high-dose chemotherapy followed by autologous stem cell transplant (ASCT), radiation therapy, and immunotherapy.

The patient described was ultimately diagnosed with high-risk neuroblastoma. She underwent induction chemotherapy that included topotecan, cyclophosphamide, cisplatin, etoposide, vincristine, and doxorubicin. Surgical resection of her abdominothoracic mass was undertaken; the abdominal component was completely resected, but the chest mass could not be entirely removed.

Following ASCT, the patient received radiation therapy. Historically, X-ray therapy has been used to deliver this treatment for neuroblastoma patients; in most centers worldwide, either 3D conformal X-ray therapy or intensity-modulated X-ray therapy would have been employed. Proton therapy is a radiation technology that has been available since the 1970s and has become more widespread over the past 1 to 2 decades. Proton therapy differs from X-ray therapy in that protons can be made to stop within tissue. Compared to X-rays, which traverse the patient depositing both entrance and exit dose, protons, with their ability to target smaller areas, allow considerable sparing of normal tissues. Proton therapy for neuroblastoma is a relatively new approach.

For this patient, the use of proton therapy compared to X-ray therapy allowed a 100-fold reduction in radiation dose delivered to the patient’s normal liver, lungs, and heart (see Figure 1). This was particularly important as it reduced her risk of pulmonary toxicity that was increased previously by her chemotherapy. It also reduced her risk of liver and kidney toxicity, allowing her to quickly receive the needed immunotherapy following completion of her radiation. The patient tolerated radiation with no clinical toxicity and is currently disease-free. 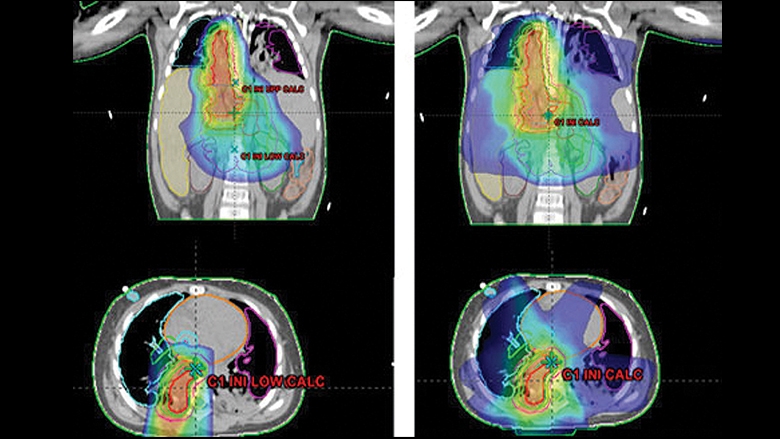 Figure 1: Radiation treatment plans for delivery of radiation to the tumor bed in the abdomen and chest using protons (left) versus X-ray therapy (right). Note the relative sparing of the liver and lungs when proton therapy is employed. Proton therapy shows great promise for patients such as the one described here, and is available to many patients with brain tumors and other solid tumors, who travel from around the world to receive treatment at The Children’s Hospital of Philadelphia.

The Proton Therapy Program at CHOP continues to provide the best in care for children and teens with cancer. The list of pediatric diagnoses for proton has been expanded, and we now offer pencil-beam scanning (PBS), the newest, most precise form of proton therapy. Patients are treated at Penn Medicine’s Roberts Proton Therapy Center, across the street from CHOP.

Our team approach and pediatric expertise distinguish us in this area. Our radiation oncologists work as part of a team, with pediatric neuro-oncologists and solid tumor specialists, planning treatment and making decisions together for every patient. The team also includes pediatric anesthesiologists, experienced pediatric oncology nurses and post-anesthesia nurses, child life specialists, neuropsychologists, and social workers. For more information on proton therapy or to make a referral, call 215-615-5678.

Tumors of the brain and central nervous system: