Published on Nov 16, 2015 in Cancer Connections 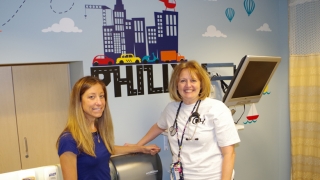 When CHOP’s Radiation Oncology Department opened in the Perelman Center for Advanced Medicine (PCAM) in 2009, proton therapy, the space and all the routines were new.

Six years down the road, the staff wanted to make the unit more kid-friendly, especially since most children, because of their age or diagnosis, require general anesthesia for their radiation treatments. Kids come for treatment every day for 10 to 33 days in a row. Because the proton therapy facility is one of the few in the world designed specifically for children, most patients are from across the United States and other countries, such as the Netherlands and the Middle East. Everything — the location, their diagnosis, their treatment — is new, and they’re understandably afraid.

Earlier this year, CHOP staff got the chance to refresh the unit when they learned they could repaint.

Collaborating with the Hospital of the University of Pennsylvania facilities department, PCAM administrators, CHOP’s child life specialists and In An Instant Art, which created custom decals that met CHOP’s strict hygiene standards, the proton staff created a special space that makes treatment days brighter for patients. The project was made possible by a donation from the estate of W. Percy Simpson. 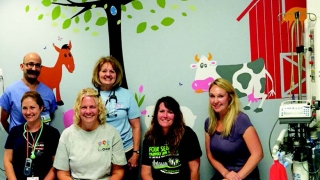 Each room now has its own color and theme: The City, The Ocean, The Safari, The Forest, The Farm and Outer Space. The central hallway was decorated, too. “We wanted to bring the outside in — especially since we’re underground,” says Beth Henry, RN, who headed up the committee that also included Ali Tappon, CCLS; Jill Bovelle, CSA; Melanie Eisenhower, CCLS; Jenna Honig, RN; Laurie Simpers, RN; and Maryellen Eisenhart, RN, “So the hall is sky blue with clouds, wild grass, a kite, a plane and butterflies our patients and staff applied themselves.”

Even the bathroom was transformed and is now a little trip to the Outback, with eucalyptus trees and koala bears. 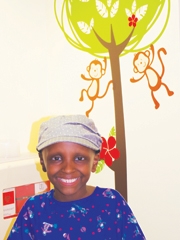 Since the redecorating was completed in October, the staff has noticed a change in patients’ moods. Anticipation has replaced anxiety. “We love that when they come here each day, they wonder which fun room they’ll be in,” says Henry.

“Now that we hung signs over each room identifying its theme, we never call the rooms by their numbers, only by their names. We wanted to make our unit kid-friendly and cheerful, and I think we did this — and more. We could not be more proud.” 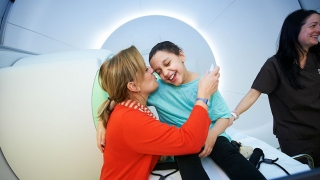 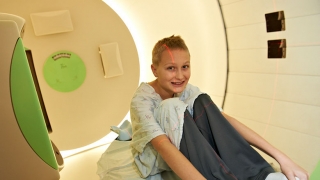 All About Proton Therapy

Prepare your child for the first day of treatment.