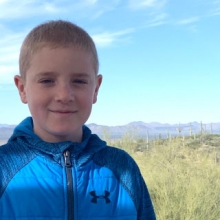 After being diagnosed with a rare immune disease, Reed traveled to CHOP for an evaluation that spared him a bone marrow transplant. A condition that’s mystifying. A cause that’s unknown. When a child is sick, words like these can terrify a parent who is desperate to hear that their child will be fine.

A child such as 8-year-old Reed, who was hospitalized in his home state of New Mexico in fall 2018 with a serious infection of his hip bone. Antibiotics were strangely ineffective — Reed continued to have high fevers and inflammation. Two weeks later, he had difficulty breathing and experienced multi-organ failure, requiring him to be transferred to a pediatric intensive care unit.

Or a child such as Dean, who as a newborn seemed constantly congested, had multiple bouts of diarrhea every day, and would wake screaming every two hours. “He always wanted to be held,” his mother, Dina, recalls. “I would swaddle him and just hold him.” At three weeks old, he needed to be treated for dehydration and was transferred by ambulance to Children's Hospital of Philadelphia (CHOP). Doctors ran a battery of tests that ruled out metabolic disorders, cystic fibrosis, meningitis and bacterial diseases.

The drive for new discoveries

Discovery and innovation have been at the very core of CHOP’s mission for more than 150 years. Two programs embody this drive: the Immune Dysregulation Program and the Food Allergy Center.

These two programs were recently selected as Frontier Programs, a trailblazing group of initiatives that are pioneering new advances in children’s health at an astonishing pace. Frontier Programs conduct visionary research that translates to cutting-edge clinical care. They offer answers often not available anywhere else in the world. CHOP champions these programs and provides critical support and guidance to accelerate their progress. Philanthropic commitments ensure that they continue to provide outstanding care and make breakthroughs in research.

Nearly 50,000 children in the nation live with some type of immune system dysfunction. In many cases, the abnormal immune system results in life-threatening disease. Often, physicians are baffled when trying to diagnose children with immune dysregulation conditions, because the diseases are rare and the symptoms don’t fit into familiar patterns.

CHOP’s Immune Dysregulation Program is one of a select few in the United States that bring together multidisciplinary experts, state-of-the-art diagnostic and genetic tests, and personalized treatments for children with autoimmune and autoinflammatory disorders. While most physicians will encounter only a few of these cases during their career, the team at CHOP diagnoses and treats children with immune dysregulation disorders every week.

“We primarily see patients who haven’t been able to find a diagnosis,” explains pediatric rheumatologist Edward Behrens, MD, Director of the program. “Patients with existing diagnoses may turn to us as a second opinion resource.” This is what brought Reed and his family to Philadelphia. In New Mexico, Reed had finally been diagnosed with hemophagocytic lymphohistiocytosis (HLH) — an extremely rare disease in which the immune system essentially attacks itself. He was treated with steroids and chemotherapy. “HLH is not a cancer, but its treatment approach is similar to that of leukemia and lymphoma, because the same drugs are often used,” explains CHOP pediatric oncologist David Teachey, MD, a member of the Immune Dysregulation team and an expert on HLH.

Reed responded very well to treatment, but his medical team in New Mexico recommended a bone marrow transplant (BMT). Concerned about such a harrowing procedure, his family contacted CHOP. “Dr. Behrens and Dr. Teachey were both amazing,” says Reed’s mother, Katy. “They discussed Reed’s case in depth and came to consensus about his care: They told us emphatically not to proceed with BMT, because of the type of HLH Reed had.” Reed completed his treatment cycle, and now off all medication, Reed is healthy and happy — and he even proudly created a presentation to teach his class about his rare disease and how it is “super hard to diagnose.”

Food allergies affect nearly 6 million children in the United States and nearly 7% of patients cared for at CHOP. CHOP’s Food Allergy Center is one of the leading programs in the country and the only center with national expertise in all four types of food allergy, from familiar food intolerances — difficulty digesting milk or gluten, for example — to rare conditions.

That expertise is what Dean needed. At his sickest, Dean was not growing and was vomiting and having diarrhea, requiring hospitalization in a pediatric intensive care unit. At CHOP, Dean was diagnosed with chronic food protein-induced enterocolitis syndrome (FPIES), a rare food allergy that affects the gastrointestinal tract. Unlike most food allergies, symptoms of FPIES do not begin immediately after eating. In the acute version, it can take hours before severe symptoms begin, so a cause is difficult to pinpoint and stomach flu is often mistakenly blamed.

Dean was referred to the Food Allergy Center, where his team of physicians and dietitians knew just what to do for Dean’s FPIES. He had been put on an amino-based baby formula, which helped immediately. When it was time to begin solid foods, Dean’s family was instructed to introduce fruits and vegetables one at a time to see how Dean reacted. First on the list: apples, which were fine. But certain foods, such as carrots, butternut squash and white potatoes, caused bouts of vomiting and diarrhea. After numerous such trials, Dean now has a growing list of safe foods — including his favorite, turkey hot dogs — and the 2-year-old weighs a healthy 30 pounds.

“No matter what happens in Dean’s future,” says Dina, “we know CHOP will be by our side.”

CHOP clinicians are leading FPIES research efforts worldwide, and the Food Allergy Center team is developing new diagnostic tools and novel therapies with the goal of successfully treating all food allergies — and, in some cases, curing them.

That’s a revolutionary goal — and a new frontier in pediatric medicine.