Findings from a CHOP/Penn Medicine study could lead to treatment for patients with lung disease, including acute respiratory distress syndrome due to COVID-19

Researchers at Children’s Hospital of Philadelphia (CHOP) and the Perelman School of Medicine at the University of Pennsylvania have identified a cellular pathway that can be targeted with a naturally occurring drug to stimulate lung tissue regeneration, which is necessary for recovery from multiple lung injuries. The findings, which were published today in Nature Cell Biology, could lead to better therapies for patients with lung disease, including acute respiratory distress syndrome (ARDS) due to COVID-19. 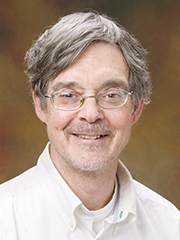 G. Scott Worthen, MD “Using cutting-edge technology, including genome-wide and single-cell analyses, we have identified a specific cellular pathway involved in lung tissue regeneration and found a drug that enhances this process,” said senior author G. Scott Worthen, MD, a physician-scientist in CHOP’s Division of Neonatology and member of the Penn-CHOP Lung Biology Institute. “These findings provide identification of precision targets and thus allow for rational development of therapeutic interventions for lung disease caused by COVID-19 and other illnesses.”

Conditions like pneumonia, influenza and ARDS – one of the known complications of COVID-19 – can damage the lining of the air sacs in the lungs, known as the alveolar epithelium, which prevents oxygen from passing from the lungs to the bloodstream and can lead to death. Patients with COVID-19 who develop ARDS become critically ill, and to date, no drugs have been developed specifically to treat ARDS in COVID-19 patients. Understanding which genetic targets and pathways are involved in regenerating epithelial tissue is critical in developing effective therapies for ARDS and similar conditions.

Previous research has shown that type II alveolar pneumocytes (AT2) are important cells involved in lung repair, both through self-renewal and transdifferentiation into type I alveolar pneumocytes (AT1), which facilitate gas exchange between the lung air sacs and nearby capillaries. Yet prior to this study, it was unknown what changes in gene accessibility occurred in AT2 cells following disease-related injury to promote repair and how regenerating AT2 cells influence interactions with nearby mesenchymal cells, which are also important in tissue repair.

Using genome-wide analyses, the research team assessed changes in AT2 after lung injury, which opens up the chromosomes within the cells and makes specific genes available to the machinery of the cell. The researchers then used single-cell analysis of AT2 cells and mesenchymal cells to better understand how the two cell types interact during injury and what cell signaling pathways are involved. The two approaches converged on a single pathway, in which a transcription factor known as STAT3 increased the expression of brain-derived neurotrophic factor (BDNF), which in turn increased lung tissue regeneration.

In further analyzing this pathway, the researchers identified a naturally-occurring compound known as 7,8-Dihydroflavone (7,8-DHF), which targeted a receptor in the pathway, stimulating and accelerating lung tissue repair in multiple mouse models of lung injury.

“We believe these findings could lead to the development of a new therapeutic that could help patients recovering from COVID-19 and similar diseases,” said the study’s first author, Andrew J. Paris, MD, Instructor of Medicine and a pulmonary specialist in the Perelman School of Medicine at the University of Pennsylvania. “Based on the results of this study, we think 7,8-DHF is an excellent candidate for entering clinical trials for patients with lung diseases.”

The research was supported by the Parker B. Fellowship Program and multiple grants from the National Institutes of Health.