Meningioma-1 (MN1) is a protein whose overexpression has been linked to acute myeloid leukemia (AML) and brain tumors, and 70% to 80% of AML patients with high overexpression of MN1 die within two years. Yet the mechanism by which MN1 causes these diseases has largely remained a mystery.

“Looking at the sequence, the protein has no obvious structure,” said Kathrin M. Bernt, MD, a pediatric oncologist in the Cancer Center’s Leukemia and Lymphoma Program at Children’s Hospital of Philadelphia (CHOP). “MN1 doesn’t resemble other typical oncogenes – or any other proteins – so it’s difficult to ascertain its function.” 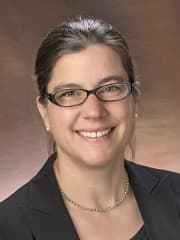 Kathrin M. Bernt, MD To better understand how MN1 overexpression causes AML, Bernt and her colleagues decided to figure out what proteins MN1 interacts with, which would help them uncover the chain of events that ultimately leads to uncontrolled cell growth. Using a proteomics approach, the researchers identified the BAF complex – a site crucial for the regulation of gene expression and differentiation that is mutated in about 20% of cancers – as the main interaction partner of oncogenic MN1.

BAF is critical in reading DNA, interacting with regulatory regions that govern how much of a gene is expressed. The researchers found that overexpression of MN1 strengthens the BAF complex’s interaction with DNA, which has direct consequences for blood cell production. Bone marrow regularly produces progenitor and hematopoietic stem cells that eventually become mature blood cells. For that to happen, the cells need to turn off early programs that allow them to wildly proliferate and turn on programs that tell them what kind of cell to be. To shut down those early programs, promoters and regulatory regions need to be silenced, but when MN1 is overexpressed, it keeps reinforcing the interaction between BAF and DNA, which encourages the overproduction in the bone marrow of unwanted progenitor cells.

“What’s exciting about this research is its potentially broad implications,” said Bernt, senior author of the paper, which was published in Molecular Cell. “This is a look at how cancer can happen beyond overactive signaling and DNA damage.”

Studies building on these results, which will aim to turn this discovery into a therapy, are supported by grants awarded  from Cookies for Kids Cancer and the Children’s Cancer Research Fund.