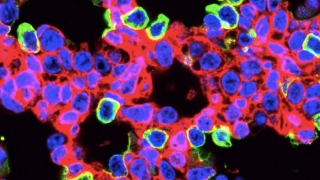 CRISPR-edited lung cells (green) with fluorescent protein. Many, but not all, are alveolar lung cells. Photo credit: Penn Medicine Using CRISPR gene editing, a team from Children’s Hospital of Philadelphia (CHOP) and Penn Medicine have thwarted a lethal lung disease in an animal model in which a harmful mutation causes death within hours after birth. This proof-of-concept study, published today in Science Translational Medicine, showed that in utero editing could be a promising new approach for treating lung diseases before birth.

“The developing fetus has many innate properties that make it an attractive recipient for therapeutic gene editing,” said study co-leader William H. Peranteau, MD, an investigator at CHOP’s Center for Fetal Research, and a pediatric and fetal surgeon in CHOP’s Center for Fetal Diagnosis and Treatment. “Furthermore, the ability to cure or mitigate a disease via gene editing in mid- to late gestation before birth and the onset of irreversible pathology is very exciting. This is particularly true for diseases that affect the lungs, whose function becomes dramatically more important at the time of birth.”

The lung conditions the team is hoping to solve — congenital diseases such as surfactant protein deficiency, cystic fibrosis, and alpha-1 antitrypsin — are characterized by respiratory failure at birth or chronic lung disease with few options for therapies. About 22 percent of all pediatric hospital admissions are because of respiratory disorders, and congenital causes of respiratory diseases are often lethal, despite advances in care and a deeper understanding of their molecular causes. Because the lung is a barrier organ in direct contact with the outside environment, targeted delivery to correct defective genes is an attractive therapy.

“We wanted to know if this could work at all,” said study co-leader Edward E. Morrisey, PhD, a professor of Cardiovascular Medicine in the Perelman School of Medicine at the University of Pennsylvania. “The trick was how to direct the gene-editing machinery to target cells that line the airways of the lungs.”

The researchers showed that precisely timed in utero delivery of CRISPR gene-editing reagents to the amniotic fluid during fetal development resulted in targeted changes in the lungs of mice. They introduced the gene editors into developing mice four days before birth, which is analogous to the third trimester in humans.

The cells that showed the highest percentage of editing were alveolar epithelial cells and airway secretory cells lining lung airways. In 2018, a team led by Morrisey identified the alveolar epithelial progenitor (AEP) lineage, which is embedded in a larger population of cells called alveolar type 2 cells. These cells generate pulmonary surfactant, which reduces surface tension in the lungs and keeps them from collapsing with every breath. AEPs are a stable cell type in the lung and turn over very slowly, but replicate rapidly after injury to regenerate the lining of the alveoli and restore gas exchange.

In a second experiment, the researchers used prenatal gene editing to reduce the severity of an interstitial lung disease, surfactant protein C (SFTPC) deficiency, in a mouse model that has a common disease-causing mutation found in the human SFTPC gene. One hundred percent of untreated mice with this mutation die from respiratory failure within hours of birth. In contrast, prenatal gene editing to inactivate the mutant Sftpc gene resulted in improved lung morphology and survival of over 22 percent of the animals.

Future studies will be directed toward increasing the efficiency of the gene editing in the epithelial lining of lungs as well as evaluating different mechanisms to deliver gene editing technology to lungs. “Different gene editing techniques are also being explored that may one day be able to correct the exact mutations observed in genetic lung diseases in infants,” Morrisey said.

Morrisey collaborated on a recent study led by Peranteau and Kiran Musunuru, MD, PhD, an associate professor of Cardiovascular Medicine at Penn, demonstrating the feasibility of in utero gene editing to rescue a lethal metabolic liver disease in a mouse model — the first time in utero CRISPR-mediated gene editing prevented a lethal metabolic disorder in animals. Similar to that study, Peranteau says “the current research is a proof-of-concept study highlighting the exciting future prospects for prenatal treatments including gene editing and replacement gene therapy for the treatment of congenital diseases.”

Funding for this work came from the National Institutes of Health (HL134745, HL132999, and TR001878), the UPenn Orphan Disease Center, the Pulmonary Fibrosis Foundation Fund in Cardiovascular Innovation, and gifts to Children’s Hospital of Philadelphia. 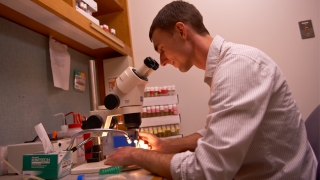 Research published in Nature Medicine shows first example of base-editing tool to correct a disease in utero in animal models. 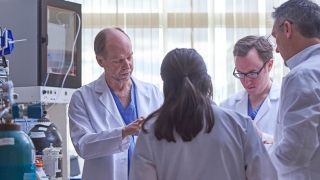 Find publications on fetal gene therapy including information about research, diagnosis and treatment by the staff of the Center for Fetal Diagnosis and Treatment at CHOP.