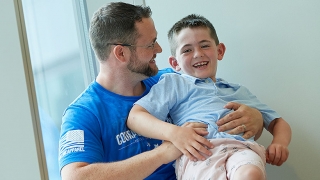 Ryan, 8, with his father, Derek. After genetic testing identified the cause of Ryan’s epilepsy, his life was transformed. When Ryan was 5 months old, he went stiff in his mother’s arms, stopped breathing and turned blue. His parents, Jennifer and Derek, were petrified. Ryan was diagnosed with epilepsy, a condition that causes seizures. For nearly half of those with epilepsy, the cause is unknown. In the other half, epilepsy can be traced to a host of different causes, such as head trauma, brain tumors, strokes, infectious diseases, prenatal injury and family history.

In the months and years that followed, CHOP Pediatric Neurologist Ethan Goldberg, MD, PhD, worked hard to control Ryan’s seizures. But because their cause couldn’t be identified, it was difficult to pinpoint which medications would be effective. At age 4, Ryan suffered a particularly devastating seizure that left him briefly unable to walk, talk, eat or drink.

For the past 10 years, Goldberg has been dedicated to changing the journey for families confronting the challenges and mysteries of inadequately controlled epilepsy. Of particular interest is a new understanding of the genetic causes of the disease. To translate these discoveries into individualized gene-specific treatments, Goldberg spearheaded the establishment of CHOP’s Epilepsy Neurogenetics Initiative (ENGIN).

CHOP recently designated ENGIN as one of the hospital’s Frontier Programs: unique, cutting-edge initiatives that are forging important new discoveries, delivering novel therapies and helping even more children thrive. With additional donor support, Frontier Programs like ENGIN are able to bring the best minds to the most challenging medical conditions and redefine what’s possible.

Ryan underwent genetic testing, which revealed he had a very rare genetic form of epilepsy. This knowledge enabled Goldberg to prescribe a specific combination of anti-seizure medications. It also provided important information about Ryan’s condition: It is lifelong; it is associated with intellectual delays, disability and autism; and it may affect his heart. As a result, Ryan is now followed by a CHOP cardiologist. In addition, his parents learned the genetic mutation was not inherited from either of them; rather, it was new in Ryan. This told his parents that the recurrence risk for a future brother or sister is extremely low.

Now 8, Ryan is enjoying life nearly seizure free. He requires special education support but is in a mainstream classroom and continues to make consistent developmental progress.

“I wholeheartedly believe Ryan would not be here at all today or would not be doing as well as he is if it were not for the genetic testing of Dr. Goldberg and CHOP,” says Jennifer. “We never expected him to be where he is today.”