A previously healthy 3-year-old boy was brought to the Emergency Department (E.D.) because of a change in mental status and diarrhea. The child was born full-term and was healthy until 6 months prior to admission, when he started to gain weight rapidly. His weight jumped from the 25th to the 99th percentile. At that time, a sodium level was 165 mmol/L, but a repeat level was 145 mmol/L.

On examination in the PICU, the patient was obese (24 kg, BMI >99th percentile) and appeared mildly dehydrated. Lungs were clear and heart sounds were normal. He was sedated, but the neurologic exam was otherwise normal. A chest X-ray showed scattered areas of atelectasis. Electrolytes revealed a sodium of 183, potassium 4.1, chloride 143, carbon dioxide 25, BUN 33, and creatinine 0.8. A blood gas while the patient was intubated on CPAP of 6cm H2O and minimally sedated revealed a pH of 7.41, PCO2 61, and PO2 98. 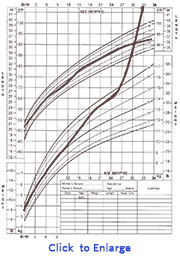 ROHHAD is a rare disorder of central control of ventilation. Patients are usually healthy until early childhood (often 2 to 3 years of age) when they develop hyperphagia and severe obesity, followed by central hypoventilation, which often presents as respiratory failure. The respiratory failure may be precipitated by a mild respiratory illness, such as an upper respiratory tract infection, or by anesthesia. Patients require ventilatory support during sleep, either noninvasively or via tracheostomy. Most patients breathe adequately during wakefulness, but a minority need ventilatory support during both wakefulness and sleep. In addition, patients have hypothalamic endocrine dysfunction. This may include diabetes insipidus, inappropriate antidiuretic hormone secretion, precocious puberty, hypogonadism, hyperprolactinemia, hypothyroidism, and decreased growth hormone secretion. Most patients have a mixture of several endocrine abnormalities, but do not usually have panhypopituitarism. Other symptoms of hypothalamic dysfunction, such as temperature dysregulation, may be present.

Mood and behavior abnormalities are frequently present, but are not universal, and some patients have a high level of cognitive and emotional functioning. However, some patients develop severe autism with aggressive tendencies, which substantially complicates their already complex medical care. Tumors of neural origin, such as ganglioneuromas, may also occur.

The etiology of ROHHAD is unclear. Brain imaging and pathologic studies are normal, and a gene has not been identified. The differential diagnosis includes late presentation of congenital central hypoventilation syndrome, which can be differentiated by testing for the PHOX2B gene. Prader-Willi syndrome is associated with obesity and may be accompanied by central hypoventilation, but is usually associated with hypotonia at birth, and genetic testing is available. ROHHAD can be distinguished from the obesity hypoventilation syndrome (which is rare in children) by the presence of hypothalamic endocrine abnormalities and by the persistence of hypoventilation despite weight loss. ROHHAD should be distinguished from isolated hypopituitarism or other hypothalamic disease without hypoventilation, and from obesity-related obstructive sleep apnea without persistent hypercapnia.

ROHHAD is a lifelong condition. Patients will require ventilatory support during sleep as well as endocrine management for the rest of their life. However, in patients without severe behavioral issues, the quality of life can be good and they can flourish in the home environment.

Our patient underwent further endocrine evaluation, which confirmed diabetes insipidus and revealed a low TSH and a high prolactin level. He was extubated, but had persistent hypoventilation during both wakefulness and sleep and could not be managed with noninvasive ventilation. He eventually underwent tracheostomy and was placed on long-term mechanical ventilation. Unfortunately, his behavioral issues progressed, and he developed severe autistic tendencies. He lost most of his capability for speech other than echolalia and removed his tracheostomy tube multiple times a day. He was unable to be taken care of at home and was eventually placed in a chronic care facility, where he is receiving intensive behavioral therapy in addition to his medical care.