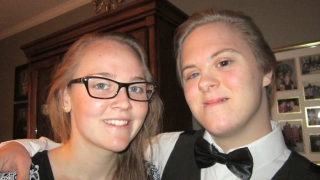 Sebastian has always enjoyed school. He likes seeing his teachers, going to classes and spending time with his friends. He attends a typical high school of more than 2,000 students, so initially we were a little worried about what it would be like for him at such a large school. But because Sebastian is so social and outgoing, he really thrives in an environment where he has the opportunity to meet so many new people.

As he has gotten older, he has become more independent at school, including going from class to class by himself, as well as being allowed to eat lunch in the main cafeteria with other friends as opposed to having to stay in his classroom. For the past two years, my other brother has also attended the same high school, so he and Sebastian are always very happy when they pass each other between classes or get the chance to sit with each other at lunch.

Sebastian is placed in a special-needs classroom for academic subjects, but has been able to participate in elective classes with typical students, which has really allowed him to explore his interests. So far, he has chosen to take TV production and chorus as his electives, and he really enjoys them. Through these classes, he has gotten the chance to see how the school news show is produced, as well as participate in several chorus concerts. For this upcoming year, he has decided to take a culinary class and weightlifting, and he is excited to get started. Elective classes have been Sebastian’s favorite part of high school.

Sebastian has always loved watching and playing sports, and growing up he played on various soccer, basketball, baseball and football teams. Currently, he plays both football and baseball in a special-needs league in our community. He is excited to continue with these sports when they start again in the fall. Every year, his baseball team participates in an end-of-season tournament a couple of hours away. This is his favorite event of the season because he gets to travel to a different city with his friends, stay at a hotel and play games against other teams.

Since Sebastian loves music, singing, dancing and wearing fancy clothes, he can’t wait for homecoming and prom — the big events that all high school seniors look forward to. He has already started thinking about who he should take as a date to these dances and what outfit he should wear. Sebastian also participates in Best Buddies, a club that fosters one-on-one friendships between individuals with disabilities and their peers, with my other brother, and he is excited to see what activities are planned for this school year.

Going into his senior year, Sabastian has already been able to experience and accomplish so much, and I can’t wait to see what the future has in store for him.