Born with a rare malignant vascular tumour, a kaposiform hemangioendothelioma, covering the left side of his face, squeezing shut his left eye and pushing his nose to the right, Kevin Portillo’s chance for survival was slim, his parents were told.

Immediately after birth, Kevin was transferred to Children’s Hospital of Philadelphia (CHOP), where he has been receiving care ever since. At CHOP, Kevin was started on chemotherapy. Whether stunted due to the tumor or killed by the chemo, Kevin’s seventh cranial nerve withered.

Dr. Phuong Nguyen, an attending surgeon in the Division of Plastic and Reconstructive Surgery at CHOP, performed a two-stage cross-face nerve graft followed by a free gracilis muscle transfer. Kevin was not a candidate for the newest facial reanimation surgery, lengthening temporalis myoplasty. During the first stage of the procedure, Dr. Nguyen removed a section of sural nerve from Kevin’s right ankle and attached it to the working right side of his face.

“We bring it across, parking it, waiting for nerves to regrow from the right side to the left,” Nguyen says. That growth took almost a year. Once Nguyen was certain the nerve was in place and functioning, it was time for the second stage of the surgery.

Over the next year, Kevin worked with Tami Konieczny, MS, OTR/L, Occupational Therapy Supervisor, and Anne-Ashley Field, MOTR/L, an occupational therapist, to gain motion on the left side of his mouth.

Read the full story of Kevin’s surgery, his ongoing progress, and what it takes to keep his smile. 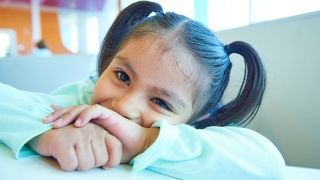 Why Choose CHOP for Plastic and Reconstructive Surgery

Learn about what makes CHOP’s Division of Plastic and Reconstructive Surgery unique, and why our experience makes us the best choice for your child’s care.

Your Child's Appointment with Plastic and Reconstructive Surgery

Find information about what to expect during your child's visit to CHOP's Division of Plastic and Reconstructive Surgery.