Over the past 11 months, the babies in the Harriet and Ronald Lassin Newborn/Infant Intensive Care Unit (N/IICU) have received more than 22,000 visits from people from all over the world. 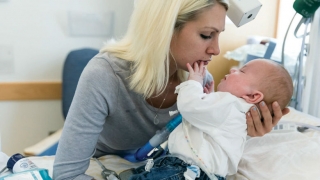 Kristen Jankowski used the N/IICU cameras to stay close to her son Vinny, 4 months, when she wasn’t able to be at his bedside. Thanks to new bedside cameras that give them a real-time view of their tiny loved ones in the N/IICU, family members have “visited” babies from as far away as Albania and Hong Kong. Brand-new aunts and uncles have cooed over their newborn nieces and nephews from California and Wyoming. And moms and dads have bonded with their babies from their college classrooms, office desks and living rooms.

The cameras allow families to stream live video of their infants on their cellphones or computers at any time of day or night. (Cameras are turned off only when babies are receiving care or are not in their cribs.) For many families, the cameras have been a game-changer. They allow parents who need to return to work, or who live far from CHOP, to stay connected to their babies during what are often long hospital stays.

DJ Manevski and Marija Tusheva’s daughter, Mihaella, has been in the N/IICU for nine months. They log in to the camera system often when they can’t be at her bedside, and even use it to visit with her at bedtime. “It gives us confidence,” says DJ. “Instead of calling every few hours to check on her, we only call once a day.” Explains Marija: “When we log in and see that she’s smiling, it makes our day and relieves some of our anxiety.”

Amber Ligon used the cameras often during her son Tyson’s time in the N/IICU, logging in between classes or from home, where she was caring for her two other children. She also gave 15 relatives access to Tyson’s camera. “The camera gave us reassurance that he was doing OK,” she says. “If the system wasn’t available, I probably would have spent most of my time with Tyson.” 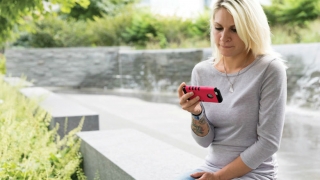 Ligon’s experience highlights another important benefit of the cameras: They help parents feel more comfortable leaving their babies’ bedsides so they can take time for themselves — something the N/IICU staff strongly encourages. “Everyone needs to disconnect a little bit,” says Denise Pavan, MSN, RN, a nurse manager in the N/IICU. “The N/IICU is a tough environment to be in.”

Because the cameras are similar to the baby monitors new parents use at home, they also provide a sense of normalcy for families — even helping to simulate the experience of late-night feedings. “Some of our moms say that when they wake up in the middle of the night to pump, it helps to see their baby,” says N/IICU nurse Molly Mahon, RN, BSN. It also helps, she says, that families can see their babies when they call the N/IICU to speak to a nurse: “The cameras make it easier to give updates and explain how the baby’s doing.”

The team is currently gathering data to measure the impact the cameras are having on families and nurses, and so far feedback has been very positive. Says Mahon: “When their babies are transferred to other floors that don’t have the cameras, parents often say they’re going to miss being able to check in.”

During the two months Jody Abrams’ grandson, Jax, spent in CHOP’s N/IICU, his mom, Jordana, rarely left his side. “Even getting her to go out to dinner was hard,” says Abrams. “She didn’t want to leave him, ever.”

The experience inspired Abrams and her husband, Peter, to support the N/IICU cameras project. Their gift, along with support from the Asplundh Foundation and the Superhero Project — which provided the initial gift to support the work — made it possible for CHOP to launch the project in late 2017. Today, thanks to their generosity, every bed in the N/IICU has a camera — and N/IICU families have something incredibly important: peace of mind.

On a recent visit to the N/IICU, the Abrams family had the opportunity to reconnect with the team that cared for Jax — and to see, firsthand, the difference the cameras are making for families. “It’s so gratifying when you make a donation and can actually see where your money’s going,” Abrams says. “Funding this program really makes us feel good.” 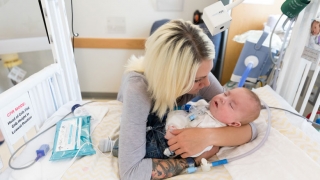 Help families stay connected to their babies in the N/IICU when they can’t be by their bedside. Support CHOP’s N/IICU Camera Project.