Pediatric researchers studying the life-threatening blood disorder Fanconi anemia (FA) have devised a method to block the abnormal biological signals that drive the disease. This proof-of-concept finding in animals and stem cells from human cord blood may lay the foundation for better treatments for children with the rare, frequently fatal disease. 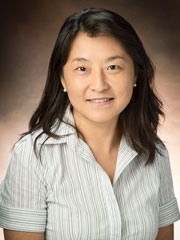 Wei Tong, PhD “We showed how, in Fanconi anemia, an abnormal protein disrupts a key growth pathway and damages the ability of bone marrow to produce blood cells,” said study leader Wei Tong, PhD, a hematology researcher at Children’s Hospital of Philadelphia. “Fanconi anemia researchers did not previously appreciate the role of this growth pathway in the disease. Because drugs for other diseases can manipulate this pathway, there may be an important opportunity to develop a new treatment.”

Because inherited genetic mutations trigger bone marrow failure that reduces red blood cells counts in Fanconi anemia (FA), until recently children with the disorder rarely lived past age 10. They have a high risk for leukemia and some solid tumors. To have a chance to survive, most children ultimately require a bone marrow transplant, but even that procedure is much more challenging than in other diseases.

FA results from a malfunction in DNA copying mechanisms. Each time a cell divides, the genetic information encoded in DNA is replicated and distributed to daughter cells. Scientists have known for years that FA is caused by mutations in one of 22 FA proteins, which normally work together to protect the integrity of genetic information. Normally, Fanconi proteins are spell checkers, sensing errors and damage, and halting the copy machinery if there is a problem. This is particularly important in the bone marrow, where stem cells divide frequently as they generate new blood cells.

If a mutation disables the “spell checking,” the replication machinery keeps jamming, and errors accumulate that ultimately damage the DNA beyond repair. Unfortunately, intervening to correct the replication mechanism is difficult. Gene therapy, which has shown promise in other blood disorders, would require extracting bone marrow cells, correcting them, and transplanting them back to the patient — a difficult process for FA patients with fragile bone marrow cells.

The new study suggests a different approach to the problem. The researchers used a mouse model of FA that lacks Fancd2, a key protein in the FA pathway. Similar to FA patients, the mice show DNA damage and impaired blood stem cell activity. In addition, the bone marrow cells do not transplant well. Tong and colleagues found that inhibiting a regulatory protein called Sh2b3/Lnk restored the ability of the abnormal bone marrow cells to transplant and grow in mic. Inhibiting Lnk also improved the proliferation and survival of blood cells and crucially improved genome integrity.

“We expected that inhibiting Lnk would restore the ability of FA cells to repair DNA damage, but this was not the case,” said Tong. “Instead, inhibiting Lnk stabilized the stalled replication machinery, allowing affected cells to continue to copy DNA, and to prevent small errors from cascading into a catastrophic failure.”

She added, “The most exciting aspect of this discovery is that Lnk is part of a well-known growth pathway that can be manipulated by existing drugs in other diseases.” That pathway, the TPO/MPL/JAK2 pathway, is already targeted by eltrombopag and romiplostin for the blood disorder idiopathic thrombocytopenia purpura (ITP), and eltrombopag for aplastic anemia. Tong said that focusing on this growth pathway may finally open the door to better therapies for children with Fanconi anemia.

Tong and colleagues will continue to further explore both the animal models of FA and the interactions among the human LNK gene, its associated protein, and blood-forming stem cells. “Our ultimate goal is to translate our knowledge into treatments for both Fanconi anemia and for the broader problem of bone marrow failure,” she concluded.

The National Institutes of Health (grants HL095675, HL133828, CA174904, CA138835, CA180604-01 and HL139091) supported this research, as did the Fanconi Anemia Research Fund, the Department of Defense, the Basser Center for BRCA Team Science Grant, the Leukemia Lymphoma Society Scholar Award and the Patel Family Award.